I can’t believe people actually plant this stuff, deliberately! OK, it’s low-maintenance and mildly decorative, but so is convolvulus, and you all know how I feel about that. Another point of similarity with convolvulus: it spreads, and where it grows, nothing else survives.

Last week, I was having one of those days where all you seem to do is uselessly spin your wheels in the mud. You know the ones? I got frustrated. I got angry. I got a spade and a large garden fork and I took out my anger and frustration on the largest patch of agapanthus. 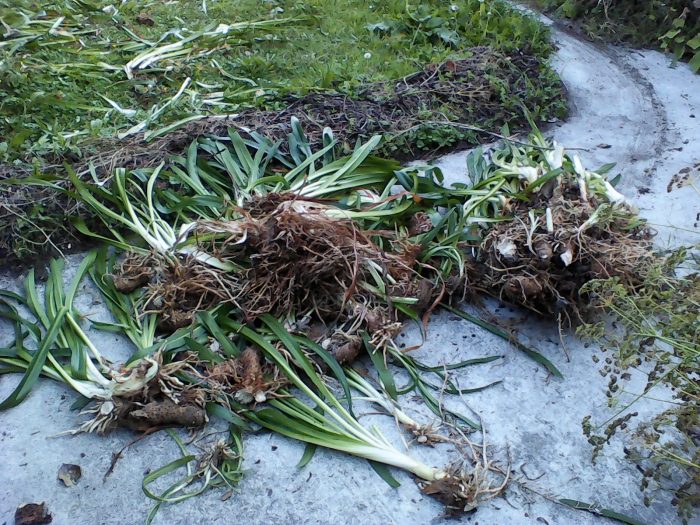 The largest chunk of root mass was so big, I couldn’t actually pull it out of the ground. I tried levering with the fork, the spade, and a length of steel. The fork and spade only loosened it, but could not lift it away. The length of steel… bent. I even tried heaving with the fork-lever while shoving a bit of broken cinder-block in there, but it didn’t work.

I pulled out the last stop in my gardening arsenal: I got the Caped Gooseberry to do it. Actually, by this point I was so tired I lay down on the grass to wait for him to come out of his own accord. Which he did, preceded by both cats, each of which noted my prone position on the grass, sniffed from a distance, and withdrew without coming near me. Note to self: if fall from tree or ladder and break back, do not depend on cats to summon help. Cats are Pharisees (according to C.S. Lewis) and will pass by on the other side.

Even after the Caped Gooseberry had heaved the root mass free, it was still so heavy that I had to drag it across the grass rather than lifting it. The question now, of course, is what to do with the giant corpse. The last lot I dug up I put on the flat concrete roof of the back shed to wither and die. That was about a year ago, and it’s still doing fine in its new career as a green roof, so it might not be the best option.

On the other hand, a larger patch of green roof might be just the thing to stop the rain getting at our firewood through the crack in the roof. But what if it flowers up there? One can’t very well behead an agapanthus in passing when it’s on the roof ten feet in the air. Not unless you’re Mary Poppins.

Dealing with the remains of the great grapevine pruning proved considerably easier – once my brain got into gear. Which is to say, after about a year and three quarters of the remains covering most of the concrete pad outside our back door, and slowly being chopped into kindling.

Most of what was left was just small bits and leaf-mould, so I decided that instead of trying to process each piece by hand, I would take up a fork and a straw broom, and create a new garden bed next to the concrete pad. Which also eliminated the annoying angle of the lawn that was so fiddly to get the mower round.

You can see the results in the back of the first picture. The self-sown buttercup is making an early bid for dominance, but the quantities of parsley seed (see right side of photo) which I have sown in the bed should result in a suitably parsley-matted-underscrub before long. 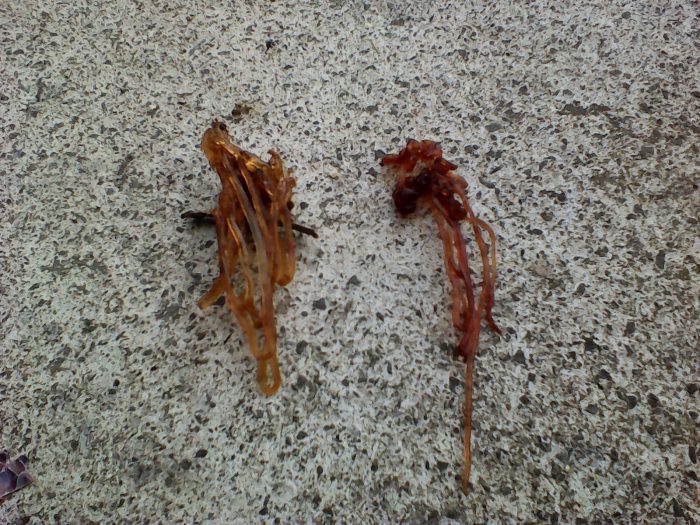 Continuing on the garden note, can you  guess what these are?

I found them in the garden – on a plant – and put them on the concrete pad, took a photo of them, and promptly forgot about them. And then it rained. 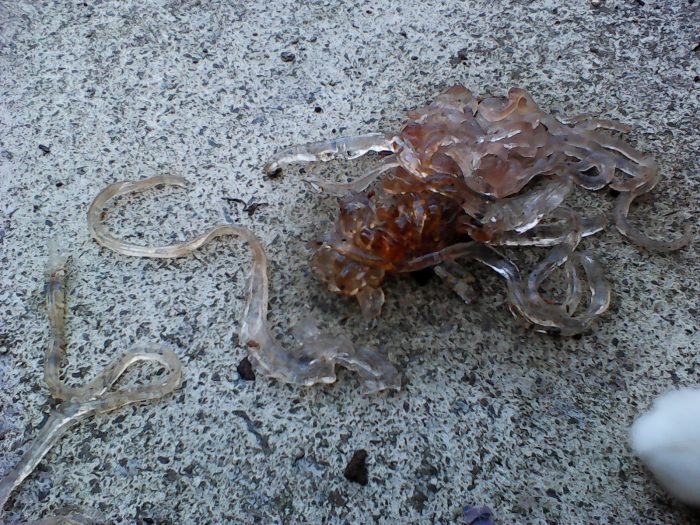 Cat’s foot shown bottom right; partly for scale but mostly because he’s an inquisitive little blighter (except when it comes to bodies on the lawn) and likes to be the centre of attention.

They’re like the world’s fattest glass noodles! They’re like… well, if you pick them up, they are almost exactly like gummy snakes, except for being cold and producing absolutely no urge to consume them.

It is in fact grape sap, or resin, or whatever you want to call it. The oozings of the grapevine, anyway. I fear it may be oozing in response to the activities of a lemon-tree borer (we had to dose the lemon quite severely a few months ago) though it’s hard to imagine any borer making headway against a mass of gook like that. It’d be like an ant trying to fight its way into a toothpaste tube that someone is slowly treading on.  Still, I’d better look into it.

But beware, the agapanthus! Your days are numbered. Just as soon as I finish recovering – because it turns out that scrubbing all the wooden floors in your house on hands and knees does not act as a cure for the aches and sore muscles you earn from heaving agapanthus about. Who would have thought?