(a rather more animal-friendly approach than making both ends meat.)

With the approach of winter, my efforts to insulate myself with wool have stepped up. Recently off the needles: a pair of socks and the Zipfelmuetzen Bommelschal hat!

But there is an issue with these yur socks. 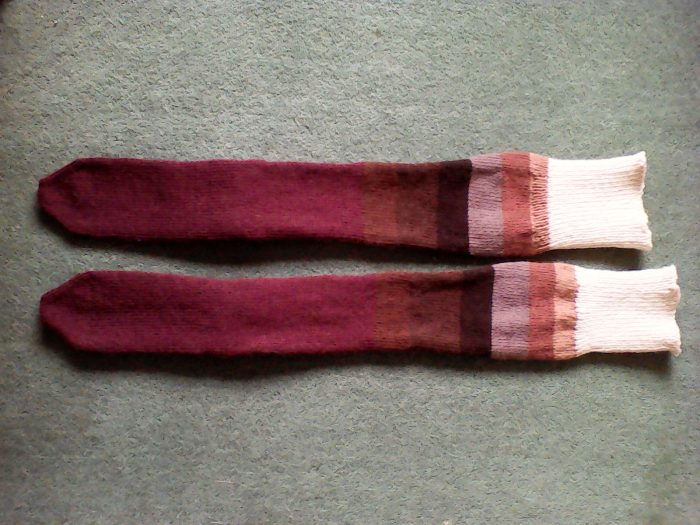 As the budding Sherlocks among you may have detected, the stripes do not line up. And this is because despite my best efforts at dividing the yarns in half (with the assistance of a swift), the socks actually came out different lengths.
However, the effect is somewhat lessened in wear, because my legs are not the same width, and wearing the longer sock on the wider leg has the effect of shortening it.

I took a picture of my ensocked legs, but due to the inevitable perspective – my torso and its attendant arms being invariably found at the non-foot end of my legs – the photo made it appear that I had very meaty calves and absolutely pinlike feet. Fortunately the Caped Gooseberry came to the rescue and took a photo of rather more realistic appearance.

Here’s what the socks look like with the benefit of my unequal legs in them.

Definitely unbalanced, yes? But these are only the third pair of socks I’ve ever knitted for myself, I think. And though I’ve knitted twelve hats for others (counting the first hat I ever made for the Caped Gooseberry twice, since it got loose and had to be frogged and reknitted), I have only just finished my first ever hat for myself.

And speaking of unbalanced… While the Caped Gooseberry was wielding the telephone (because that’s what you take photos with in this crazy world), I inveigled him into taking a few photos of me in the completed Zipfelmuetzen Bommelschal (Bommel being, I have just learned from Google Translate, the German word for pompom).

The hat is fine. The picture of me wearing it wrapped warmly about my head, on the other hand, is, well… not the sort of thing you’d want to see coming down a dark alleyway, put it like that.

I will spare you the one where I’m smiling, because I don’t want to scare you off permanently.

Next on my needles is a pair of slippers, since I managed to wear right through the heels of the pair I knit four years ago. I unravelled the yarn (composting the worn bits), put it into hanks by means of the swift, laundered it, untangled it by means of the swift once more (it turns out there’s a reason they tell you to tie your hank in more than one place), and wound it into balls with the nostepinne.

The recycled yarn doesn’t look quite as dapper as the leftover yarn that’s simply been sitting in the drawer for the last four years, but then it doesn’t look too shabby, considering, and once it’s all done up in slipper form the difference should be less noticeable.

I’m also feeling the urge to knit another pair of socks. Any sock-knitters out there with insight on the addictive nature of sock-knitting? Perhaps that might explain the look on my face…