There comes a time in everyone’s life, sooner or later, when they stop partway through getting dressed, and, for the first time, ask themselves that deep question: where do socks come from?

Fear not, your questions are about to be answered, in the relative anonymity and privacy of the internet (relative to your settings, choice of browser, &c.).

The process begins when a sock egg is laid. These eggs can be found in great numbers at your LYS (Lair of Young Socks), where you can select the sock species of your preference. As socks do not like the solitary life, it is generally best to get two eggs of the same sort, although some advanced practitioners have had success with combining two eggs of complementary though different species.

END_OF_DOCUMENT_TOKEN_TO_BE_REPLACED

(until I read the Wikipedia article about them)

1) Though flightless, they do actually have wings. It’s just that the wings are so small you can’t see them through the general featheriness.

3) Unlike most birds, they have marrow in their bones (which makes them stronger but heavier). Strong legs, though – look at those talons!

4) They’re monogamous. Their relationships last longer than a lot of human ones, and that’s even before you take the shorter lifespan into account. Plus they call to each other in the night during mating season. (All together now: awww…)

5) They belong to the same family as cassowaries, ostriches and emus. (Imagine the difficulty of getting everyone in the same shot at family reunions.)

6) The female kiwi takes about a month to make The Egg, during which she has to eat about three times as much as usual. Except for the last few days, because by that time the egg is so big there’s no room left for food inside her insides.

7) The egg is massive: up to a quarter of the mother’s weight. If humans did that, it would be like giving birth to a four-year-old. Ouch. (By contrast, the female kangaroo, who weighs about a third as much as your average woman, gives birth to a baby the size of a jellybean. Good thinking, kangaroo.) It’s like the kiwi used to be ostriches, and the eggs haven’t adapted yet.

8) The father does most of the childcare (and by childcare I mean sitting on the egg like a tea-cosy and waiting for something to happen).

9) There’s a giant kiwi hill figure in Bulford, in Wiltshire. And by giant I mean it’s about 129.55 metres taller than the largest kind of actual kiwi. (Note: actual kiwi are not normally measured in acres.) 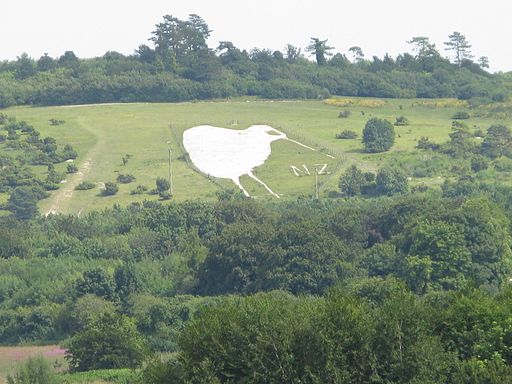 One last thing, though, and it’s very important: you should never put a kiwi in a fruit salad. Kiwifruit, yes. Kiwi no. I know it’s confusing, what with them both being small, round, brown and fuzzy, but kiwi are endangered. Kiwifruit aren’t. Being a small, round, brown fuzzy Kiwi myself, I am very clear on this point: leave the kiwi out of the salad.