Rule ONE. VERY IMPORTANT. Do not allow other cats to bite you in the bum.

Either learn to fight, or learn to run. Because humans are uptight beings, and if they find a sizeable hole in your hindquarters that did not appear in the original design, you will be shoveled into the Box of Illimitable Dread and this will happen:

Rule TWO. Should the worst happen, and the Cone of Shame have you by the throat, endeavour to carry it off with panache. Avoid, if at all possible, walking into doors, door frames, furniture etc, because it is beneath the dignity of cats to back up, and sliding sideways can be problematic in this condition.

Rule THREE. Ensure that your humans are brought to regret your enconed state. Experienced cats have an arsenal of techniques at their disposal, but here are a few tips for the apprentice irker.

a) Doors. The classic “I want to go in/out” routine is somewhat limited if your humans insist on keeping you imprisoned within, so you will need to focus your energies on the “I want to go out” aspect. Clutter up entranceways whenever it appears the humans may use them, and scrabble pathetically at the cat-flap for extended periods.

b) Other vents. Should a human open a window even wide enough for a paw, make vigorous – and preferably loud – attempts to insert the cone through the gap. Best done while the human is in the room, and preferably while they are attempting to concentrate on something.

c) Outside. Should your humans give way to your importunity, permitting you to go outside under supervision, crouch on the path and stare fixedly at a nearby plant. (Whatever you do, do not relieve yourself, or you will be haled back indoors toute suite.) Once the bored human has relaxed their hawkish oversight, take the opportunity to climb on the back fence, the garden shed, or up a tree.

d) Other cats. You are – temporarily – a freakish-smelling oddly-shaped monster. Use this to your advantage and terrorize other feline occupants of the house without mercy.

e) Toileting. When cluttering entrances (see a, above) try to give the humans the impression that your bladder is on the very point of rupture. Should they fall for this, follow instructions in c, above. Naturally, a dirt-box or other receptacle will be provided for your use. Generally, it is best to use it – one does not wish to soil one’s own quarters – but strategy is required here also. Never use the dirt-box when a human points it out to you. Gaze vaguely at it and then potter away. 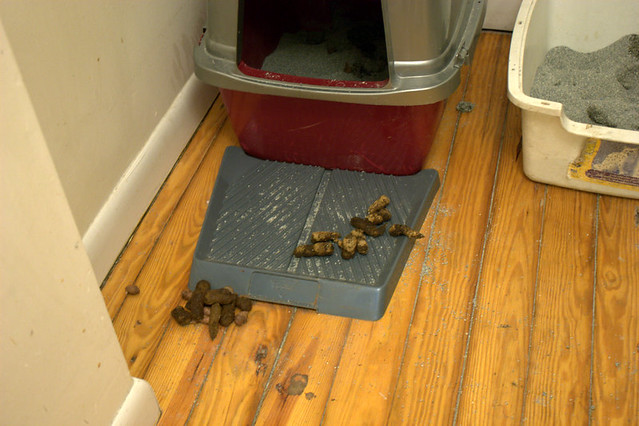 If at all possible, wait until the humans are retiring to bed, and relieve yourself then. It goes without saying, of course, that one ought never to empty both bladder and bowels simultaneously. The best approach is to empty the bladder first, before the humans have quite retired for the night, so as to ensure that they go to the trouble of emptying it before sleep. Once the fresh receptacle has been placed, one may then proceed to the emptying of the bowels, being quite certain that the smell, if nothing else, will drive the humans out of bed to empty the receptacle in pure self-defense. One may then proceed to f, below.

f) Sleep. Should your humans be so unkind as to shut you out of their bedroom, make as many disturbing noises as possible with the aid of the benighted cone. Pathetic mewings and scrabblings, or unnerving crashes in the middle distance – you know your own humans best. Some find giving the impression of imminent regurgitation to be useful in this situation.
Once you have gained access to the bedroom, it is important to drive home to the humans the unacceptability of the situation in which they have placed you. This can be done most neatly by attempting to snuggle under the covers with them. You appear to be all kindness and affection, and the human gets a nice sharp section of cone implanted in their face.

Rule FOUR. After a suitable course of treatment on the lines indicated above, the humans will decide it is time you had your stitches out and your cone off. And while this is the desired end, it is nonetheless owing to the dignity of cats everywhere not to submit to the means to this end.

They will attempt to put you back in the Box of Illimitable Dread. RESIST.

Note from DM: Boromir, aka The Kitten, failed to follow Rule ONE and can be seen in the photo at top. He has employed most of the above techniques, but mercifully not all of them. Yet.