Holes in your pockets. The very image of lack and loss. But do not despair – the garment and its pockets can be saved. All you need are pins, needle, thread, a bit of fabric and the will to make a difference.

If you’re anything like me, the invalided garment sits in a heap in the mending pile until you either grit your teeth and get on to the job of mending it, or decide you don’t need it that badly after all and out it goes.

The problem wasn’t so much finding the time or motivation to mend them, as finding the know-how. Because the problem was one I’d never tackled before. I knew I could put a patch on a patch pocket, but this is the other kind: set-in. Further complicated by discovering that the whole side of the pocket was so worn you could read through it.

Would I need to replace a whole pocket? Did I know how? (Clearly, no.) But that didn’t stop me. The first thing I did was to wash and iron a long thinnish piece of calico (or muslin, depending on where you come from). That was it for a month or so while my eyes recovered.

The next step was to lay the calico (as I shall call it) over the worn side of the pocket and pin along the only straight line the pocket had. I used the selvedge (or selvage) for this. Some people say you should never use the selvedge for anything, but clearly, I am not one of them.

Then it was a matter of pinning, trimming, and pinning some more. Handy hint: if you’re going to tuck an edge under a pre-existing overhang, you can push the whole cloth under and then press down. Pull the fabric out and it’s got a crease showing you where the fold will be. Cut the excess off, a short distance from the fold, and Bob’s your uncle. Example: 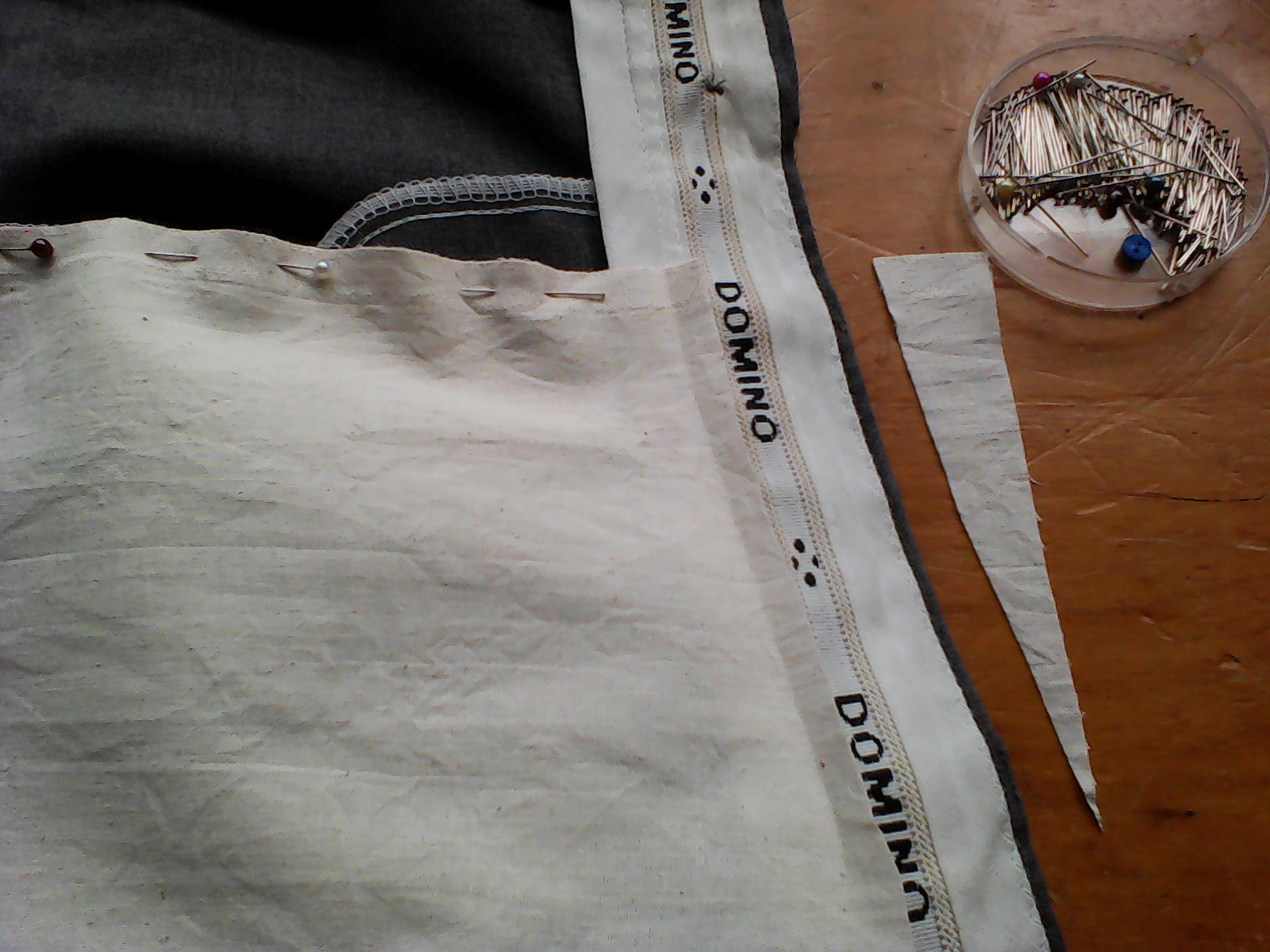 In this case, the folded hem will fit under the waistband (the bit marked Domino). Don’t forget to fold the fold the other way to pin in place – raw edge underneath.

Carry on trimming and pinning, until the fabric is fitted all the way around.

To make my life that much easier, instead of shaping the calico to the curve of the pocket at the bottom, I simply pinned a hem and folded it over to the back of the pocket. Like this. (Clicking may result in a bigger image.) 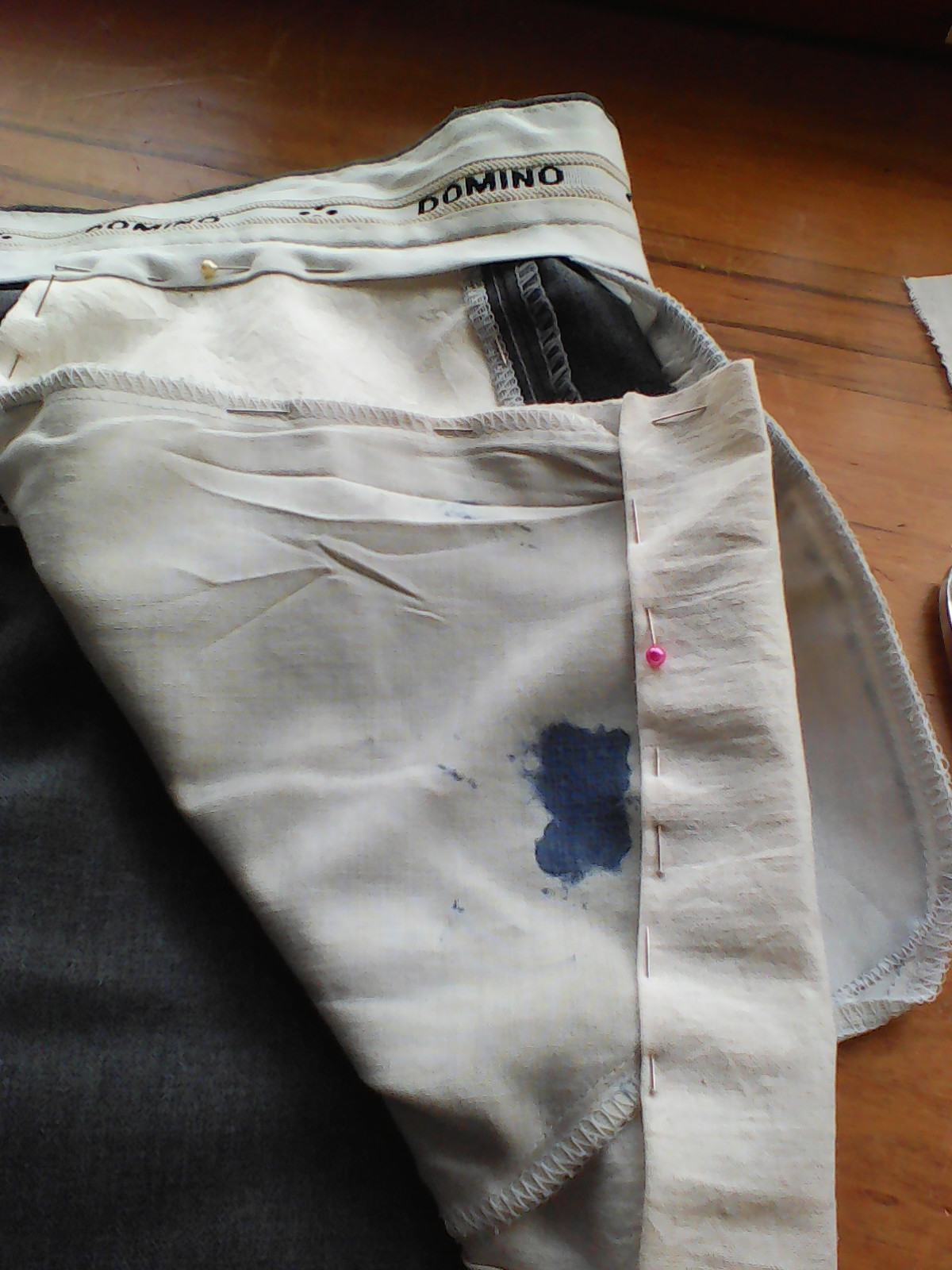 Then I tacked it. Tacking is one of those things, like flossing your teeth and knitting a gauge swatch, that you know you ought to do, but frequently don’t. Maybe it’s my age beginning to show, but I find I am now doing all of those things. I don’t say I necessarily enjoy them, but I enjoy not having the after-effects of not doing them: wiggly seams, dentist’s drills, and outsize socks.

The other important thing to remember is that you shouldn’t tack through too many layers. If you can’t get your hand into the pocket, you’ve gone too far. The same goes for the fold-up seam at the bottom, unless you want a squared-off pocket. 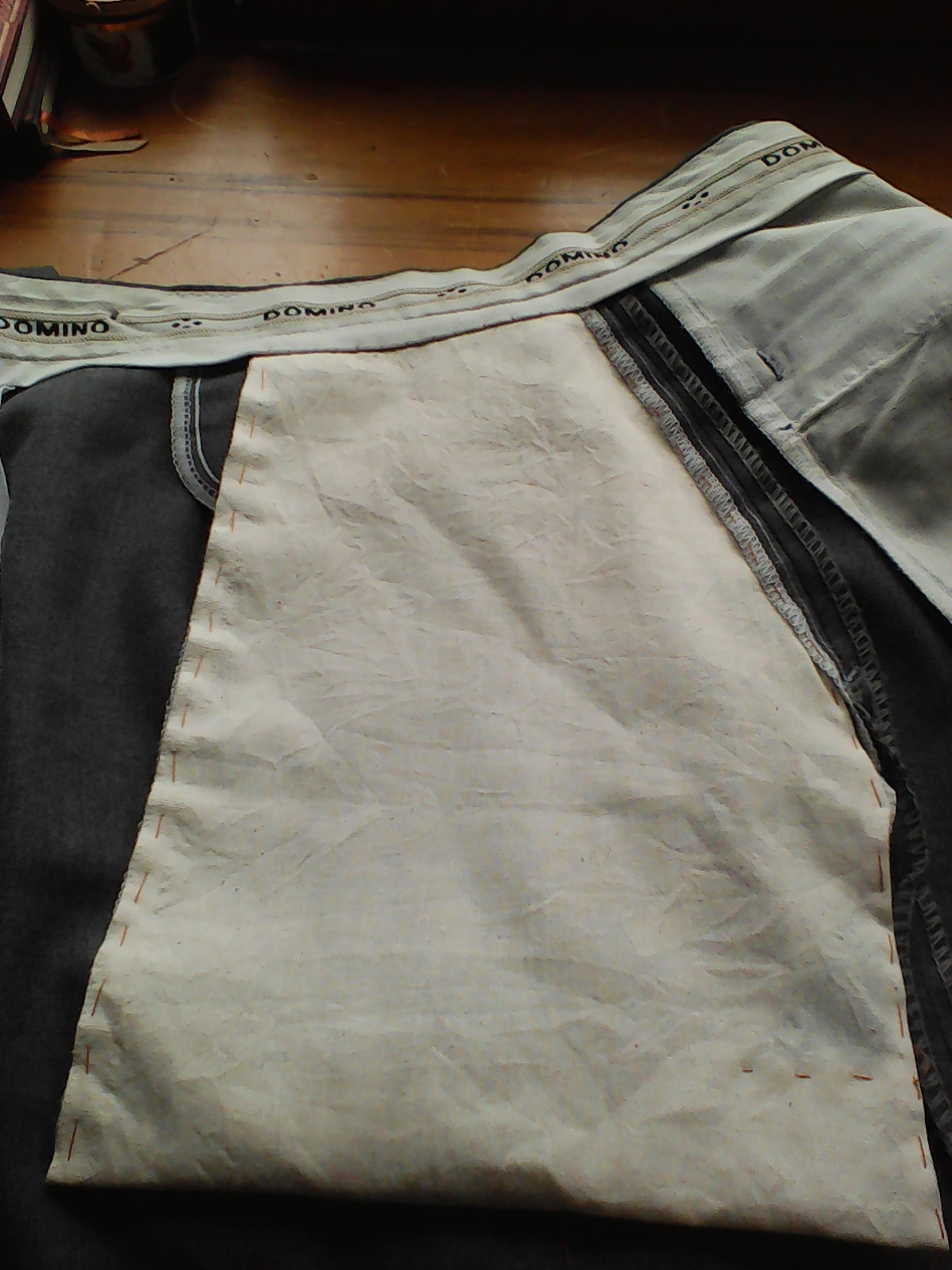 The other good thing about tacking (besides the stability it gives when doing the actual sewing) is that you can have a try-on without the wearer having to do the Dance of Extreme Delicacy as pin-points menace their recoiling flesh. This is a chance to make sure that there are no uncomfortable bumps, chafing spots etc; and that the pocket hangs properly.

Then you retrieve the garment, and (at least if you are me) repeat the procedure from the top for the other pocket. 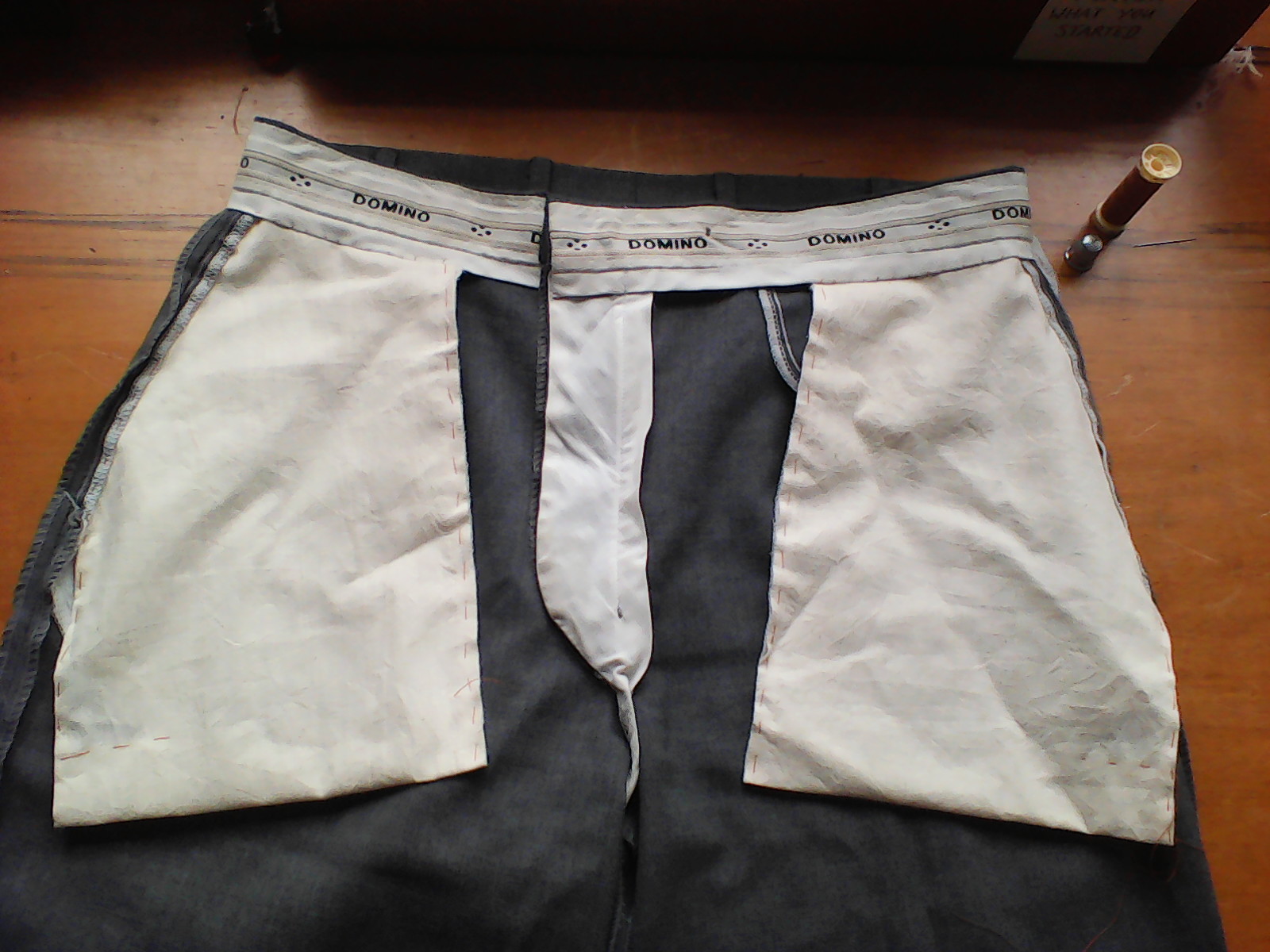 Once it’s all placed, pinned, tacked and tried, you are ready to sew. I sewed by hand, because there are some things that are fiddlier by machine than hand, and sewing through only some of the layers is one of those things. It didn’t take very long, to my surprise.

Once you’ve sewn everywhere that was tacked, you can take out the tacking. Finished? No, not quite. You still have a hole on the inside of your pocket, and unless you want to deal with the anguish of trying to extract something from between the original pocket and the new layer, you had better take the final step.

Simply sew an outline of running stitch around each hole, fastening it to the new layer. (But not all layers, unless you want a donut pocket.) As thus: 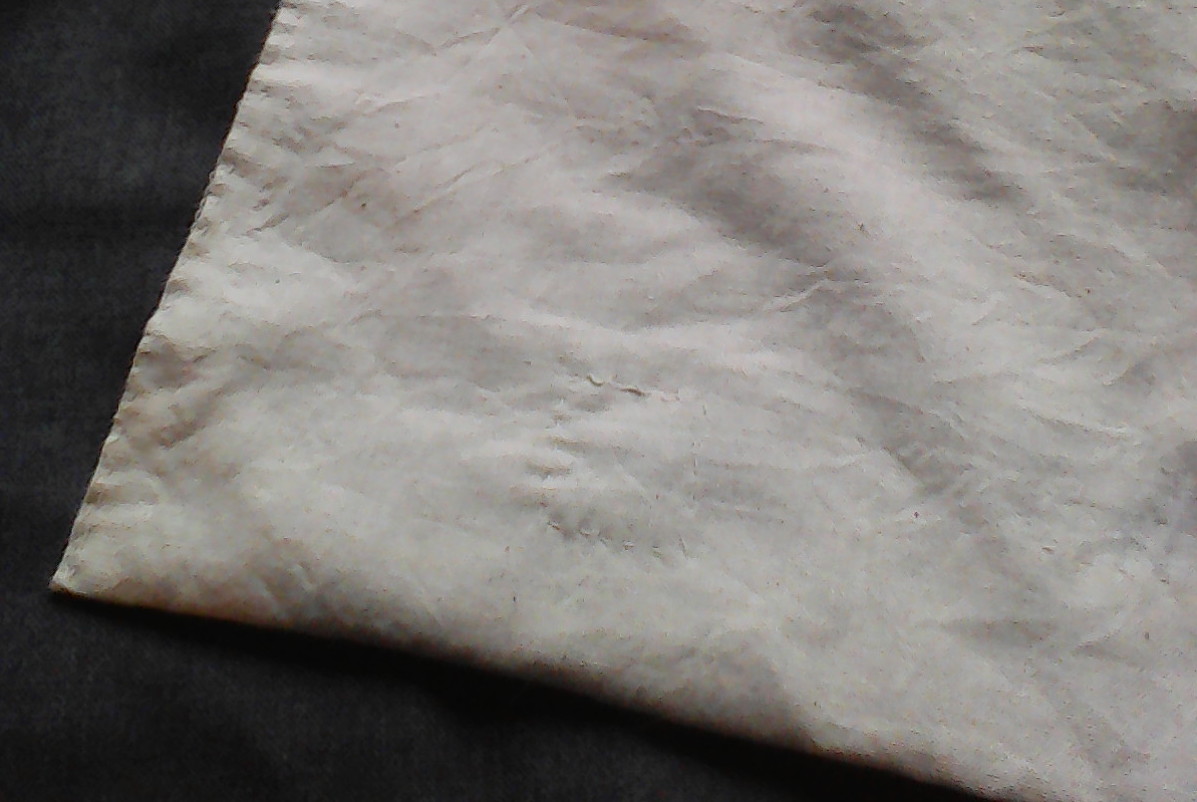 Well done! You have rescued a garment from the looming shadow of the rubbish dump and restored it to useful life. And that is what I call practical ethics.