Have you ever noticed how often literary orphans are equipped with aunts? These aunts generally fall into two of four categories: Good, Bad, Controlling and Crazy.
[Note: since most of these aunts have been known to the world for decades if not centuries, I make no apology for spoilers. You have been warned…] 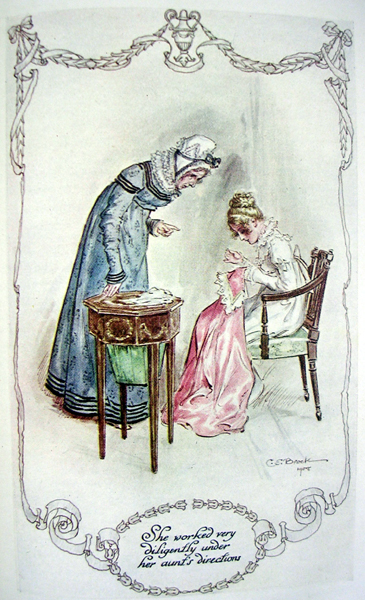 Jane Austen starts us off with Mansfield Park (1814), containing a pair of aunts – sort of. Fanny Price has two maternal aunts, but her Aunt Bertram is laid back almost to the point of nonexistence (she operates more as a plot device than a practical person). This lack is more than made up for by the virulence of Fanny’s Aunt Norris, who most definitely falls under the heading of Controlling. And as even her virtues (thrift, for example) seem to be founded on poor motivations, I personally have no qualms in classifying her as a Bad Aunt.

Charlotte Brontë had no difficulty, in 1847, in outdoing Austen’s creation with her own aunt of Gothic awfulness: Jane Eyre‘s Aunt Reed. She treats her niece as a semi-servant, allows her spoilt children to maltreat their cousin, and eventually packs her off to a typhoid-ridden school she is lucky to survive. (“Eight years! you must be tenacious of life,” as Mr Rochester subsequently remarks.) And then, still blaming Jane for the animosity she feels, she deliberately lies to separate Jane from the only relative who cares for her. Clearly, a Bad Aunt, and Controlling too.

Three years later, Charles Dickens produced Miss Betsey Trotwood, a great-aunt whose exceeding eccentricity causes her to storm out of the house on discovering her niece has produced a male of the species. On the other hand, she takes her great-nephew David Copperfield in when he becomes an unwanted orphan (feeding him “aniseed water, anchovy sauce, and salad dressing” to comfort his tears). She also gets him off to a good start in life. A Good Aunt, all things considered, but definitely heading toward the Crazy section.

1876 (the nineteenth century was well-provided with both aunts and orphans) saw an American aunt arise, from the pen of Mark Twain: Tom Sawyer‘s Aunt Polly. A stern woman, perhaps, but her heart is in the right place. One thinks of the incident of the cat and the patent medicine (see Chapter XII). Overall, a Good Aunt, albeit somewhat Controlling.

Jumping into the twentieth century, we meet two of the craziest aunts of all time in Joseph Kesselring‘s Arsenic and Old Lace (1939). Mortimer Brewster’s Aunt Martha and Aunt Abby are the sweetest, kindliest, gentlest homicidal maniacs imaginable. Leading lights in the Crazy category, but possibly still candidates for the Good section, depending on how you define goodness. On the one hand, very caring and hospitable. On the other hand, serial killers. I leave it to you to decide.

1961 brought us two of the nastiest aunts, from the imagination of Roald Dahl; viz James‘ Aunts Spiker and Sponge. They take Aunt Reed’s worst ideas and run with them, perpetrating what can only be classified as child abuse. Definitely Controlling, definitely Bad, and definitely high on the list of People Who Deserve to Be Fatally Flattened by Fruit.

Last on the list is Princess Lily’s Aunt Hortensia (ETA 2018) who illustrates the principle that meaning well is not always the same as doing well. She is undeniably Controlling (Young Ladies Do Not Argue is one of her favourite maxims) but on the other hand, she has her reasons. Over the years, I have come to feel rather sorry for Aunt Hortensia. I’m sure she’s a lovely lady deep down, but years of fear and denying herself for Duty have had their effect on her. I shall be bold, however, and claim for her a place among the Good Aunts.

Who are your favourite – or most-loathed – aunts of orphans? Share in the comments!