Two questions for you this week. Let’s start with the easy one: what do you call this?

A benchtop? Countertop? Worktop? Something else entirely? What if it’s in the bathroom – or even the laundry?

Now here’s the tough question: how much of their surface area is unintentionally covered? Be brave: your answer can’t be worse than mine!

Bathroom: three square feet, about one intentionally covered, none unintentionally. Two bare, so
3 : 1 / 0 / 2

Laundry: about one square foot of actual bench – totally covered, but mostly with things which are used right there – and about six square feet of table, which is half covered in a cat lair (intentional) and half covered in gosh-we-should-do-something-with-that (totally unintentional).
7 : 3.5 / 3.5 / 0 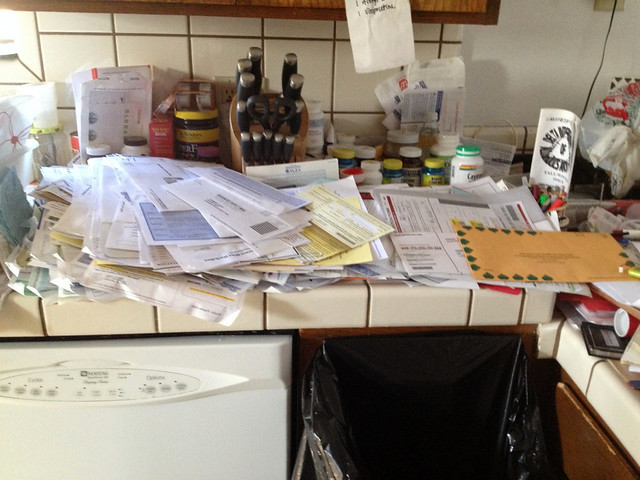 The kitchen (oh, the shame!) has three benches, one about 16 square feet half-covered (ok, all-covered, but half’s intentional), one about 9 square feet with 1/10 clutter (if you don’t count the day’s dishes waiting to be washed), and two of about 2 square feet, one half-cluttered and one tolerably full but with no clutter (tea-making space: sacrosanct). That doesn’t include the draining board, which seldom has anything but drying dishes on it.
29 : 11 / 10 / 8 (if dishes recently washed)

Ouch. I’d never realized before that with the exception of the bathroom bench – and not even all of that – there is no habitually clear bench space in my house. And I have the lurking suspicion that if I removed the intentional covering, the unintentional would take its place as the night the day (only faster).

So what are your numbers? Share in the comments and give me something to shoot for!