Not the sort which forms on the inside of kettles when your water’s a bit on the hard side. That kind is something that simply happens of its own accord. The kind we’ve got is something else entirely – it’s intentional.

We have a little lime tree in a pot. It wasn’t doing terribly well earlier this year, so I dosed it with nitrogen and Epsom salts and compost and mulch, and it perked up a bit. It perked up a jolly lot more when I discovered the existence of scale insects, and gave it a drenching with some organic anti-scale spray.

In due course I moved the lime into a larger pot, and it continued flourishing. But hist! the plot thickens. The ants which had always seemed interested in the lime continued their attentions in the new pot. I don’t usually interfere with the doings of ants who keep outside the house, but this…seemed odd. I suspected. I inspected. I learned the dreadful truth.

The ants are farming scale insects on my lime tree. Those industrious little scurrying critters are busy checking on their cattle, which they are grazing on the tender juicy stems of the lime. What exactly they are farming them for, I could not say. It definitely isn’t E120, and it sure ain’t shellac. 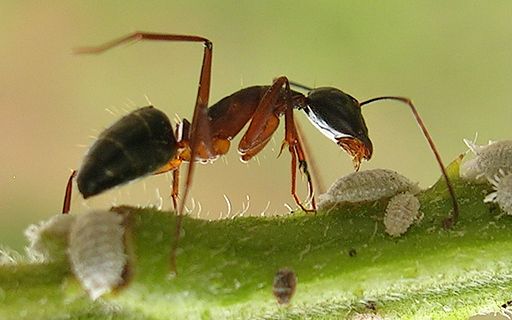 We are most certainly not amused. And we are not going to put up with that sort of thing. Not being keen on repeated sprays of the anti-scale stuff, I am contenting myself with checking every few days for new scale and picking them off by hand. (I moonlight, as has been previously mentioned, as the Death of Small Insects.)

In other citrus-related news, two of the four cuttings I took from our lemon tree have decided to produce flowers. This is ridiculous. A four-inch cutting can not sustain one three-inch lemon, let alone three or more. Fortunately I don’t think they’ve been pollinated. The third cutting appears to have failed, although it hasn’t turned brown and shrivelled yet, and the fourth has very sensibly concentrated on growing leaves.

I took the cuttings seven weeks ago, when it looked like the lemon tree was hors de combat, or at least hors de citrus borer. But I was unwilling to let the parent tree go without a fight, and I am happy to say that after a course of cutting back, organic insect spray, organic oil spray (for scale), borer spray, blessings, seaweed, nitrogen feeds, Epsom salts and transplanted nasturtium, it appears to have decided to survive.

Nasturtium repels some kinds of insects and attracts other kinds away from neighbouring plants, so it’s useful to have around, even if you don’t fancy eating the leaves, flowers or seeds. Also keeps down weeds!

Despite the larger lemon being Recalled to Life, I think I will still plant the little leafy one, if only to prove that there are more sensible places to locate a citrus tree than on the south (pole-ward) side of a tall fence, in the shadow of larger trees. In the fullness of time it will find a home across from the spot reserved for the lime tree, and they can enjoy the sun together. The sun, and a strict No Scale policy.

2 Replies to “The Other Kind of Lime Scale”