While the days when a lady was considered insufficiently dressed if she went out without gloves on are, happily, no more, we have perhaps gone a little too far the other way.  Gloves are given no consideration at all, and this is, I feel, a loss and a mistake. One does not always wish to have naked hands.
Here, then, is a guide to forming a complete (or compleat, if you prefer) wardrobe of gloves.

The most basic glove, the glove par excellence (unless you live in a tropical clime), is the winter glove. The primary purpose of this generally knitted glove is to provide warmth to the hands, so for pity’s sake don’t lose your head and buy a pair of polyester or acrylic ones, just because they’re entertaining. Lack of breathability does not constitute warmth. My basic pair are brown, and of slightly different sizes, but they are Just Right nonetheless.

Variations on the winter glove include mittens (not really gloves, but useful if it’s so cold you won’t have functioning fingers anyway, so why bother?) and the resulting hybrid offspring. These latter include the fingerless glove with mitten covering, and modern screen-addict gloves which let you bare a single finger to sacrifice to the cold for the benefit of your addiction.

Fingerless gloves which don’t pretend to be mittens, however, are a distinct breed. They are useful for pretty much any circumstance when you want to use your fingertips but you’d still like a little more warmth at the ends of your arms than is provided by your sleeves. I have had my ‘garret gloves’ (as my parents dubbed them) since my student days, when they prevented my hands from freezing while I typed essays at the arctic hallway desk. I still use them, not only when typing but also when it’s not really cold enough for a full glove. A trans-seasonal glove, you could call it. Also useful for hanging out laundry in winter.

The rest of the gloves can be broadly divided into two main classes: the glove practical and the glove decorative. It is, of course, possible for a glove to be both (William Morris would approve), but one purpose always takes precedence over the other.

Decorative gloves are almost exclusively connected with Dressing Up. Opera gloves, elbow-length gloves, and the dainty but less often worn wrist-length gloves. Possibly the decline in popularity of the latter is due to the fact that if you hardly ever get the chance to dress up formally (something which has fallen by the wayside in modern casual culture), you really want to push the boat out when you do.

I don’t have any evening-dress gloves myself, but I do have a pair of white gloves earmarked for doing easily soiled handwork with (though their previous owner just wore them as gloves, being of the ladies-wear-gloves era).

Practical gloves, on the other hand, abound. There are the non-domestic forms, of course, such as the latex gloves of the medical profession and people who professionally handle food; but those are not of concern to us. There are, however, three forms of practical glove which are most useful to have about the house.

The first is the all-purpose rubber glove. Useful for dishwashing, cleaning, or other jobs where you don’t want whatever you’re dealing with to get on your hands. Personally, I don’t wear them for most things, as I have rather small hands and even the size small gloves still have bags of extra space which gives an effect rather like wearing slippery mittens. Annoyingly, this does not stop them sticking to my hands with a flesh-peeling death-grip when I try to take them off.

Dishes and cleaning, therefore, I do with my bare hands, and if necessary, I give them a good scrub afterward. (If your hands need to be washed after you’ve used them to wash your dishes, You Are Doing It Wrong.) But if I’m spraying for borer, say, or cleaning up after the scraping of lead paint, I find this sort of glove very helpful.

Proceeding out the kitchen/laundry door, we reach the garden. Contrary to popular belief, two sorts of gloves are beneficial here. There is, of course, the classic garden glove, always useful for grubbing weeds out of the soil without constantly having to scrub your nails clean afterward. These tend to be more fitted and flexible. Then there is the hardy work glove – useful for tossing firewood about, pruning trees, and other vigorous activities.

One can, of course, wear the same kind of glove for both these sets of activities. But work gloves will fail to give you the responsive touch which makes all the difference in wresting weeds from their chosen haunts; and garden gloves will not necessarily protect you from large splinters, whipping thorns and the like.

The other downside to using the same pair for both sorts of activity is that they wear out twice as fast. I had a pair of black leather gloves which I used largely as work gloves but also for gardening gloves, and alas! they died. I managed to find a pair of work gloves which are not too utterly dissimilar in size to my hands, but I realized that garden gloves would also be necessary for doing regular stints in the garden without spending an equal amount of time trying to get my hands clean afterward.

Not to mention the convenience of being able to take the dirt off at the door, as it were, instead of smearing it all over everything between the garden bed and the laundry sink. Perhaps if I lived in a less damp climate, this would be less of a problem, but mud does seem to feature rather largely in my garden. 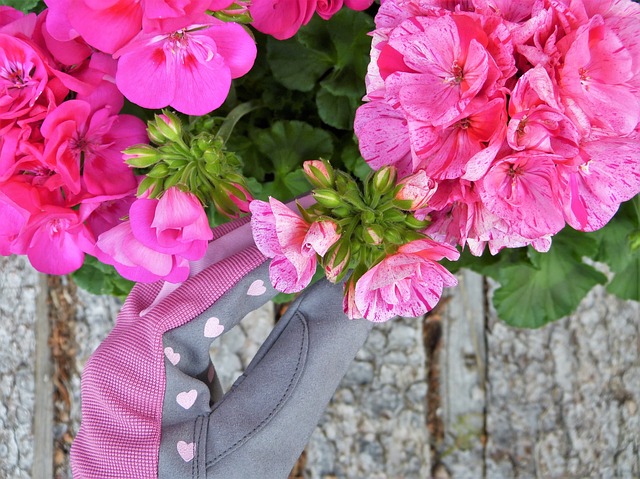 So when I was out and about the other day, I popped into a “home improvement” store to find a pair. I still can’t understand why so many people assume that if women need anything practical (tools, gardening implements etc) they’ll only buy it if it’s pink. I loathe most forms of pink, and I avoid such things on principle. My work gloves, for instance, are leather trimmed in lime.

In the end, though, I didn’t have to deliberate for hours over which pair to pick. I bought the pair that fitted. I tried on the small gloves (mostly too big), the extra small gloves (too small), and even some of the children’s gloves (only slightly too small). But at least the pair that fit weren’t pink. They’re black and red, which does make me feel a little like some sort of gardening villain, but at least I won’t have to worry about losing them in the grass.

So there you have it: winter gloves, fingerless gloves, dressy gloves, cleaning gloves, work gloves and gardening gloves. There are of course a myriad of specialty gloves (driving gloves, falconry gloves, boxing gloves…) but the six above I would call sufficient for a compleat glove wardrobe.

What sorts of gloves do you use? Would you add or remove anything from the list?

2 Replies to “A Compleat Wardrobe of Gloves”