Thanks to my cat, I can, like Hamlet’s father’s ghost, “a tale unfold, whose lightest word would harrow up thy soul, freeze thy young blood, make thy two eyes, like stars, start from their spheres, thy knotted and combinèd locks to part and each particular hair to stand on end, like quills upon the fretful porpentine.”

Got that? Harrowed soul, frozen blood, eyes popped out and hair on end. (Question: were dreads the ‘in’ thing at the University of Wittenberg, or was Hamlet just bad at combing his hair?)

If, however, these effects on your soul, blood, eyes and hair do not constitute your idea of a good time, allow me to redirect your attention to some other cat-related posts:

the nine poses of the cat,

cats and their creatives,

the question of whether cats are really dragons (according to E. Nesbit, yes)

and a discourse on cats in cones.

As a bonus, here’s a picture to explain what cats think of snow: 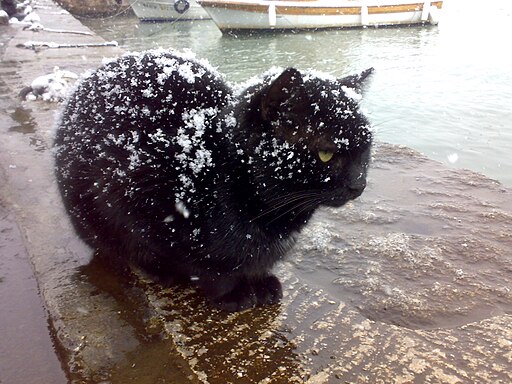 Still with me? Let the horror commence.
Picture to yourself the scene. A quiet domestic evening in a comfortable (if somewhat cluttered) living room, perhaps with a cosy logfire to drive away the winter chill.

A cat calls, without. (Sounds like a stage direction by Shakespeare.) Cat then enters through back of living-room cupboard. This is entirely appropriate: small children have known for years that terrors emerge from the back of wardrobes and the like.

The cat proves to have a bird in his mouth. This household has a strict Thou Shalt Not Eat Bird policy (as least as far as the cats are concerned; two-legged members of the household have been known to roast and eat free-range chickens). I therefore leapt upon the Kitten (for it was he) and compelled him to release the poor thing.

He complained vigorously (albeit in a rather muffled tone), but at length complied, letting it drop limply to the carpet. At this point, my first order of business was to determine whether the bird was in any way salvageable. This may sound foolishly optimistic to you, but I have had my successes. After a night resting in a quiet cat-free pigeon-hole in the woodshed, at least three birds have been sufficiently recovered to fly away under their own steam, leaving nothing but a splot behind. A fourth required bolstering up with a worm from its mummy (or possibly daddy, I didn’t ask), before it felt able to depart.

The first thing which caught my eye about this bird was the limp way its neck flopped. Broken, thought I to myself. Deceased; no hope. But wait! My eye, feverishly scanning the sad little lump of feathers, caught sight of a pinkish pulsing patch. The bird lives – what then? But scarcely did I have time to wonder what the most humane course of action would be (and whether I had the skills to carry it out) than my eye was arrested by the bird’s face.

There was something wrong with its beak, it looked like. Perhaps a congenital deformity which had rendered it easy prey to the blackguardly cat. I looked closer, squinting in the dim light of the bulb far overhead. My heart lurched.

The ‘deformity’ attached to the face of this head-lolling bird was a snail. Confused, I looked back to the bare and pulsing patch, only to have my worst fears realized, as it dropped away and began to crawl across the carpet.

The bird was alive… with maggots.

I ran for the ash shovel and the toasting fork (which, as God is my witness, will never be used for the toasting of foodstuffs until it has been suitably cauterized in the fires of, e.g., Mount Doom), and scraped the whole sorry bundle off the carpet – not exempting the carpet-perambulating maggot – and flung it into the darkness outside, no doubt setting a new snail speed record as I did so.

There is one comfort to be had from all this: it does rather support our theory that at least some of the broken-necked birds which the [insert disgusted epithet here] cat brings in have died of natural causes (counting cats for the present as unnatural, which I am strongly inclined to do). Windy nights and broken necks have a high correlation, it would appear.

How have I coped with this distressing experience, I hear a kindly reader ask?

Not too badly, I thank you. Apart from a steadily decreasing tendency to suddenly cry “Maggots!” in a traumatized tone, I seem to have taken the horror in my stride.

But I will never look at snails the same way again.

2 Replies to “A Tale of Horror”