To mark the occasion of both our cats passing into the Senior Cat bracket – at its widest stretch, anyway; they are 7 and 8 this month – I thought I would endeavour to embarrass them both by posting their baby photos online.

(Now don’t you wish you had refrained from excessive shedding all over the house, carefully-timed medical emergencies on public holidays, peeing in forbidden locations, and bringing mangled birds inside late at night? Not to mention stashing dead mice in places either unpleasantly hard to find or dreadfully easy. Let this be a lesson to you: behave with greater decorum in your autumn years.)

Here she is at about ten weeks old, unaware of the camera and therefore relatively unblurred – unlike all her other early pictures. These were taken a few days after she arrived in the household, as the first day she spent mostly hiding behind the fridge and doing seagull impressions. 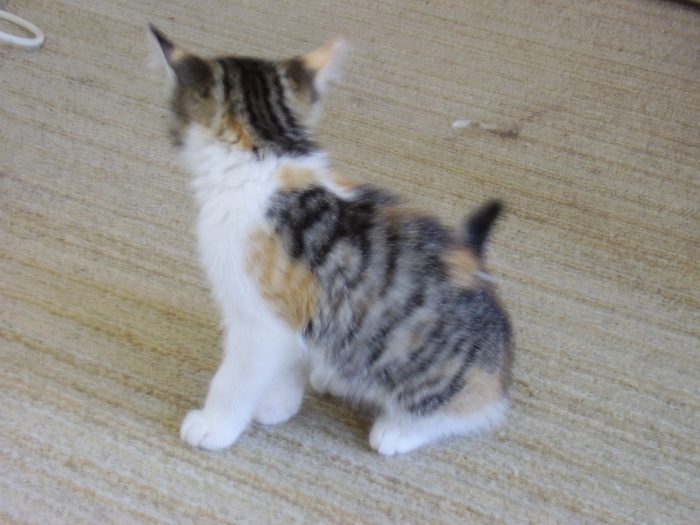 She swiftly settled in, though, and was soon extending her empire across neighbouring properties, like some sort of undersized Catherine the Great in fur. There’s no such thing as a bloodless victory, however, and one morning I awoke to find her purring smugly while bleeding on my duvet from a slashed ear. There went the funds for A Certain Operation, which was, therefore, postponed.

It was not long before she took to sunning herself on the back porch while flirting outrageously with visiting toms. She would sit there with the come-hither glinting in her eye, and when the visitor would accordingly come hither, she’d smack him right between the eyes. This was repeated until she got bored, at which point she would go and sit just inside the cat flap, where he could see her but not reach her.

However…  as Horace so aptly observed, you can drive Nature out with a pitchfork (or a smart bop between the eyes), but she will return. 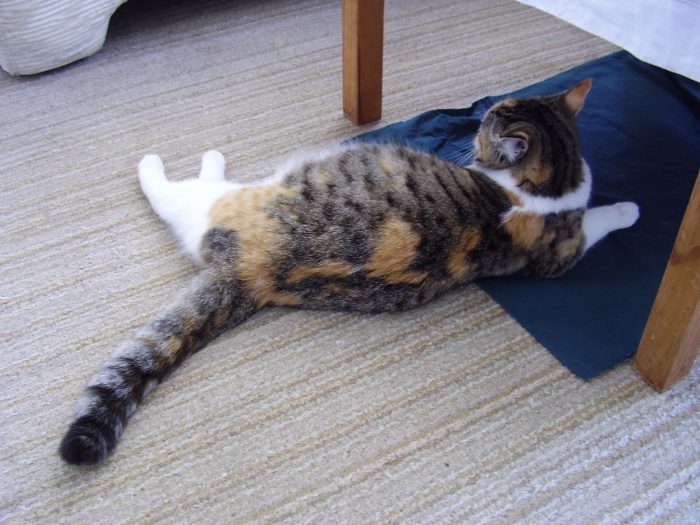 Raskol kept us on tenterhooks for as long as possible, but one morning my father quietly woke me to announce she was finally having her kittens. Being a novice in the kitten-having department, she chose to park herself under the lowest chair in the house. Presumably for privacy, although in fact the business end of the, er, business was still sticking out into the room.

Having discerned three bulges on the bulging sides of the mother-to-be, we were not surprised when three kittens were born. We were, however, quite surprised at the arrival of #4.

Of course, kittens look like nothing on earth when they are fresh, and in any case we didn’t want to disturb the new mother (apart from trying to persuade her to relocate somewhere more sensible and less draughty), so there are no pictures of the slimy little gobbets of kittenhood to inflict upon you. 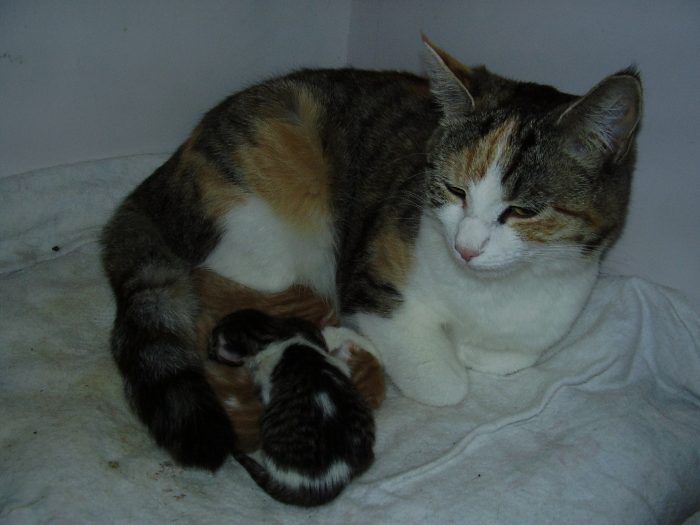 Here they are some time later, although I admit a cursory head-count suggests the presence of only three kittens. A look through my archives suggests that the kitten who took most strongly after Raskol herself was so frequently occluded by her mother that were it not for the pictures of the kittens without their mother, I would begin to doubt my memory and think she didn’t exist.

In fact, there are parts of my mind which are even now considering the possibility that Raskol and the tortoiseshell-and-white kitten were actually one cat pulling some sort of interdimensional hoax.

Because there are plenty of pictures showing that kitten without her mother. After we persuaded Raskol to keep her little family in my wardrobe, she was happy for me (or anyone, really) to keep an eye on them while she went out in between feeds to – presumably – maintain her vast empire. 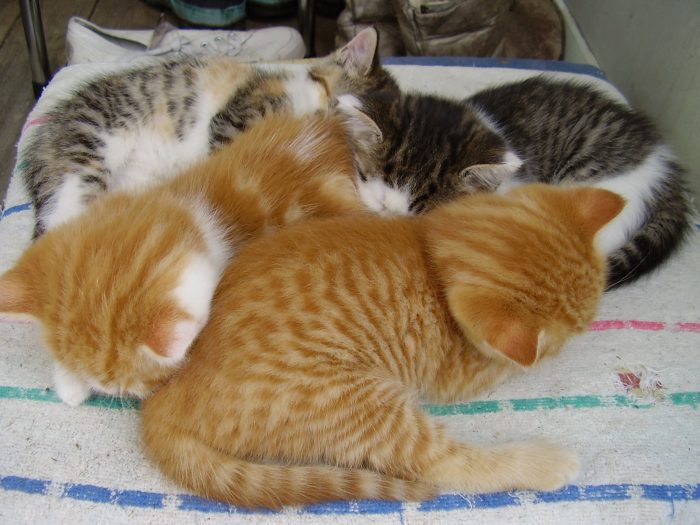 Not that the kittens always took this lying down, however. When they were a mere few days old, and not yet seeing or walking, one kitten not only struggled out of the wardrobe (shaking off the drop to the floor which was most of his length) but crawled a couple of feet along the floor, yowling for his mother to come back.

She didn’t, so I picked him up and popped him back with his siblings in order to keep him warm. A strong kitten, thought I to myself. Bold, intrepid. Could this be the one to grow up big and strong and relieve his mother of territorial protection duties? I thought so, and I named him Boromir, after the bold and fearless (if somewhat impulsive and headstrong) captain of Gondor.

But I was deceived. This Boromir is no battler. The only cat he’s prepared to fight with is his mother. He even had a couple or three visits to the vet and time in a cone, because when confronted by another cat, he just lay down and let the other cat bite him. 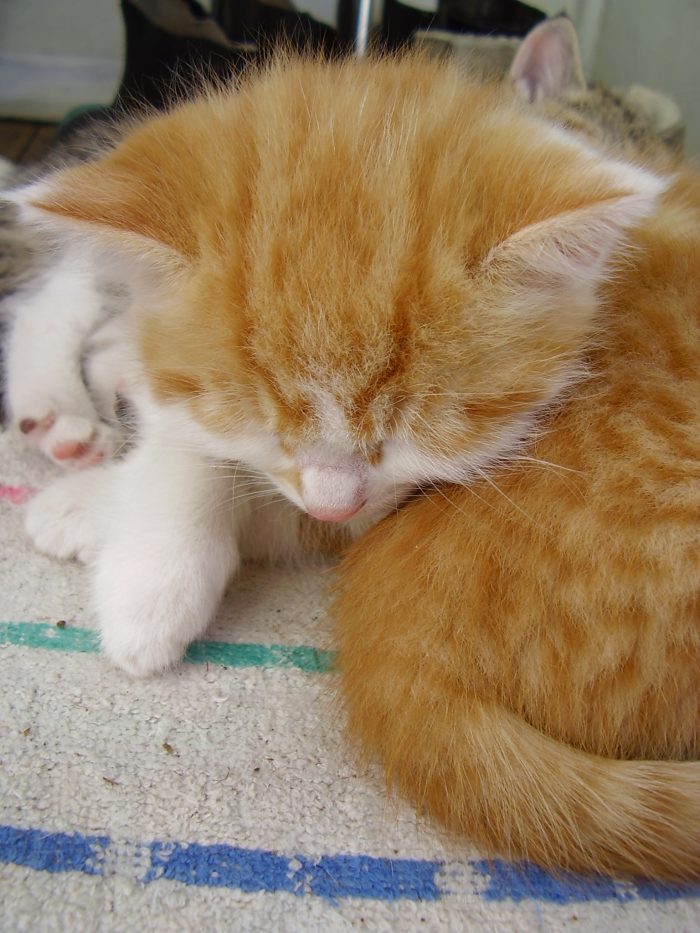 But how could I resist a face like that?

And I will say this for him: he’s a good cat to have around in winter. He likes to spend the day sleeping on someone’s lap, and the night sleeping on their bed (although he prefers a position which will result in unavoidable contortion in the neighbouring human).

He’s definitely a people cat, and Raskol – particularly after having kittens – is more of a Cat Who Walks By Herself. She’ll sit on your lap, but once she feels her duty in that direction has been discharged, she’ll move somewhere else. Unless it’s cold. And then she loves you.