We’ve all been there: a long-awaited work comes out in our favourite fictional world, or based on the work of a favourite writer, or the latest movie in a cherished series finally opens and along with all the other eager fans we say… bleh.

One of the subjects which came up in an informal discussion at GeyserCon last weekend was the frustration of fans who find the powers that be redirecting their beloved canon in ways that don’t fit – ways that are dictated more by budgetary and merchandising considerations than by the true heart of the thing. (Naming no specific names, but things involving the word Star seem peculiarly susceptible.)

It occurred to me to wonder: is the problem, at its root, that the new works are being produced not for the fans, but for those the producers would like to be fans?
The idea returned again last night, when I was watching the adaptation of an Agatha Christie novel into an hour and a half TV movie. I watched it once. I’m not sure I’ll ever watch it again.

I don’t mind that they inserted Miss Marple into an originally Marple-free story. I don’t even mind that they changed whodunnit – after all, Dame Agatha herself was known to do it. Appointment with Death has different perpetrators in the novel and stage versions, albeit with the same victim. 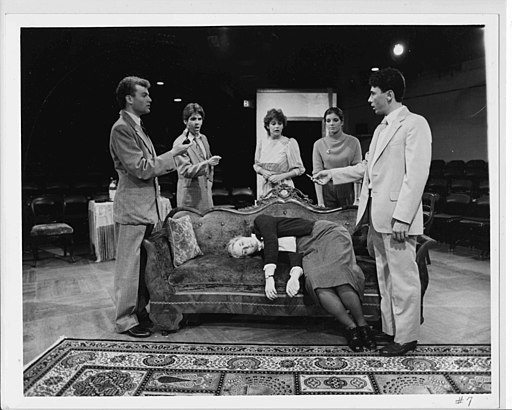 What I do object to, however, is the replacing of Dame Agatha’s meticulous plotting with cheap sensationalism. All sorts of things happen – not just the standard murder-with-complications but extravagant extra murders, festoons of covert and deeply secret relationships, grave-robbers, people waking up next to bloodied corpses and gratuitous everything you can think of.

Not that I object to extra murders, secret relationships, bloodied corpses etc – but they should at least be germane to the plot, with some kind of set up and/or explanation. One Christie adaptation I saw had a man found dead in a bear trap on the grounds of a stately home. Why? To increase the murderer’s profit – I think. OK, but why a bear trap, of all inconvenient and awkward ways to murder someone? And for that matter, how? No explanation offered.

People do things for no apparent reason but that it will cause a sensation – regardless of whether it has been set up, or even if it is consistent with their character. That which was a carefully gauged part of the plot may still be included, but stripped of all meaning, so it becomes merely A Thing Which Happens.

There are Things! Happening! all over the place, which provides a certain excitement, but then you spend the next few days saying “but why did he—?” and “why didn’t she—” and you realize that none of it actually makes sense.  It becomes “a tale told by an idiot; full of sound and fury, signifying nothing.”

Case in point: bullied young woman falls in love and marries (surreptitiously, of course, though why it had to be secret I’ll never know); her husband is murdered on their wedding night, she is predictably distraught, and then… she goes off on what would have been her honeymoon trip with a woman she only met yesterday – and even then only for about five minutes, during an interrogation. Why? No idea. Like Disraeli – but unlike Agatha Christie – they “never explain”.

The problem, I think, is that the producers of these adaptations are not content to appeal to those who actually enjoy Agatha Christie’s works. They want to get away from the cozy image, so they go full bore for the extravagant sensation, hoping to pull in the “I didn’t think I liked Agatha Christie” crowd.

I think the problem is the same with other fandoms. The fans become frustrated, because the new works aren’t being true to the core, and aren’t connecting with the fans – because they’re not aiming at them. They’re aiming at the people who “didn’t think they liked XYZ” but will enjoy the movie and maybe buy their kids the matching toy on the way home.

And that’s a pity, for once a story has lost its core (or heart) and been estranged from its fans, it has nothing left to it but a slow and inglorious death.

But don’t lose hope! A story may lie mouldering in its vault until the memories of the mob have passed on, but it can still rise again – and all the healthier if its tomb isn’t broken into by piratical archaeologists looking to make a quick buck from the riches of the past.