I could be a sparklingly amusing person in a jester hat, or a demurely mysterious person in a wide-brimmed black felt. I could be all Regency in a bonnet, or chic in a natty felt, or (cough) be mistaken for a Russian folk-singer in a (faux)fur pillbox.

I could be an interesting adventurer in a hand-knotted safari hat, or coolly elegant in a fine white straw. I could be a hardy out-of-doors type in a double-thickness reversible crochet beanie, or just plain eccentric in a knee-length stocking hat. And so on, and so forth.

The irony, of course, is that most days I wear bandannas/headscarves/kerchiefs, and more than half of my hats won’t go over anything like that, no matter how solitary and thin. And some won’t cooperate with hair unless it’s short or hangs down my neck. So most days I don’t wear a hat at all, and yet I have all these hats, many of which I barely wear or haven’t worn in years.

The problem is, keeping all these alternative personae on hand takes up space. And looking around the house in my mind’s eye, I realized that that went for more than hats. I am well into my thirties now, and while modern Western culture seems to extend ‘youth’ as far as the mid-thirties, that’s a very recent phenomenon (and by no means world-wide even now).

It seems to me it’s time to set aside the personae I might have liked people to think I was, and to focus on the person I am called to be. To count the opportunity cost of becoming my true self. And also to get rid of some hats.

At the end of my musing praying meditating walk, I did buy some yarn, and I made a Snow Drops Hat. It’s a minimalist version – no pompom, no ties (though I might add them later) and no lace over the top (because the high contrast highlighted the unsatisfactory unevenness of my tension). 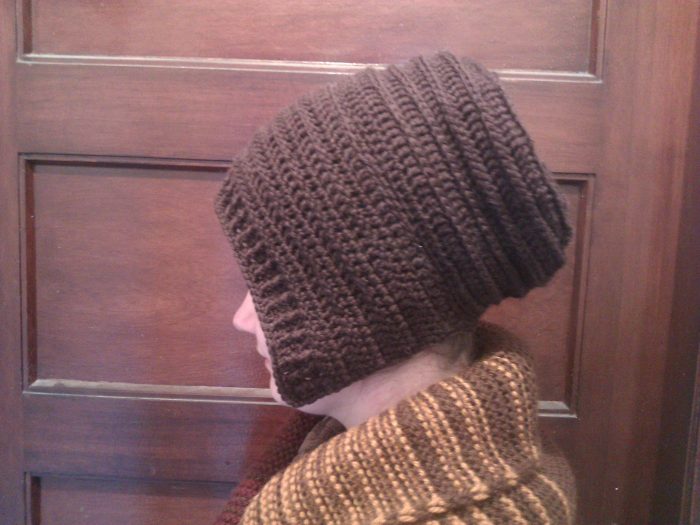 It looks a little like an old-school bonnet, and a little like a medieval coif, and being a plain dark brown, it goes with everything in my wardrobe. There’s room for a thin bandanna and all my hair. It simply works, and I expect it will keep on simply working until the weather eventually becomes too warm for wool. And then I will need to consider a sunhat that will simply work.

I don’t think it will be easy saying goodbye to the hats, or the roads-not-travelled-down they represent. But you can’t walk down two roads at once, and the less baggage you take with you on your chosen road, the better.

Have you said farewell to the people you might have been? Or is your life cluttered up with the options you’re keeping open?