Despite my overall eccentricity, I consider myself a conventional knitter. I’m not into in improvisational design, knitting on broomsticks or arms or anything else that leaves gaping holes in the knitting, or using novelty yarns with lumps or wire or spangles in, or knitting models of gardens, fruit, royal weddings or anything else of the sort.

No judgement if that’s your cup of tea, but I am more a plain-but-well-made-and-durable-garments kind of knitter. But even I have my eccentric moments. The Dishonour Cow, for example. And more recently, the Diplodocus from Tina Barrett’s wonderful book Knitted Dinosaurs (winner of Pattern Book I’ve Used Most Often Without Actually Owning A Copy, Alas). 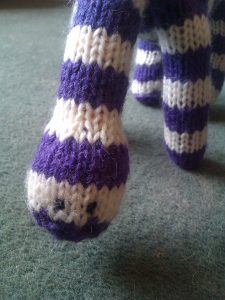 On hearing that a friend was expecting, I promptly started planning what to knit. But babies who arrive in summer don’t really need to be swaddled in endless layers of wool layette (and I really don’t like knitting with cotton), so my plans stalled – until I remembered knitting a stegosaurus from that book for another baby some years before.

To whiz down to the library for the book was with me the work of… well, I don’t remember, but I stayed not on the order of my going. Deciding which dinosaur to knit took some time, however. There are so many I still want to knit! I eventually settled on the diplodocus – all those long gangly limbs etc are just the thing for a baby’s grip.

And then, because life is too easy if you just follow the instructions, I made some alterations.

For a start, instead of bulky yarn in blue and white, I used purple 12ply and cream 8ply. (Using yarns of different gauges together is not generally recommended. There are reasons for this.) I also adapted the pattern to knit in the round (seaming is not my favourite thing), which meant that I had to stuff it as I went.

Not having any jeans to cannibalize, I nixed the denim pockets (and soles), and also kind of made up the pattern for the front legs as I went along, since the pattern in the book says they’re the same as the back legs despite them clearly looking different in the pictures. 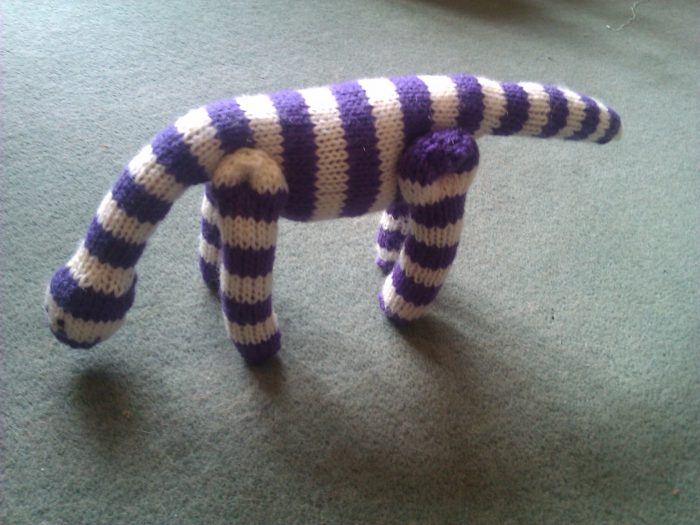 After finishing the body, knitting the legs, and sewing two of the latter to the former, I decided the tail wasn’t long enough, so I nipped off the end and added a couple more stripes. This also allowed me to knit in a bell – mercifully muffled by the stuffing as I do not want to lose my friendship with the recipient’s parents!

Being knitted in and not just stuffed in, the bell is sufficiently well secured that the recipient will not be able to pop it out and swallow it. Not without chewing the whole tip of the tail off, anyway. 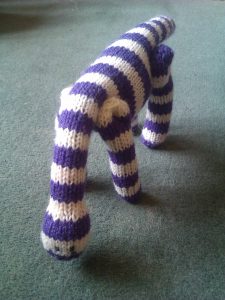 For a similar reason, the eyes are sewn with black wool rather than buttons or anything indigestible.

So there you have it: my knitted eccentricity for the season. As we are now in the season of summer – or, as I have previously termed it, Hostile (Hot) – I am laying aside knitting for the present, and turning my attention to sewing. Of which more hereafter…