Cats are creatures of habit, each with their own preferences of time and place for eating, sleeping, licking and so forth. But they are all united (including the big cats) by their favourite poses. Here are a selection of the classics.

The Sphinx.
One of the most common cat poses, this features the cat couchant with front paws peeping out from beneath the furry chest. Unlike the ancient Sphinx, the nose is generally worn; and flinging passers-by to their death if they don’t answer a riddle correctly is hopelessly passé (as well as requiring rather more effort than the average sphinxing cat is prepared to exert). Suitable for use as a purring pose, but also lends itself well to regal disdain.

The Cream Bun
This pose is a close relative of the Sphinx, but involves the curving inward of the front paws so as to produce a purely limbless appearance. To count as a true Cream Bun, the tail must be curled well in: the head must appear to be the only appendage the animal possesses. Also an excellent purring pose, and frequently indicative of that smug contentment that is quintessentially the cat. If properly placed, may result in the Monorail.

The China Ornament
As Anne Morrow Lindbergh wrote, “I saw the most beautiful cat today. It was sitting by the side of the road, its two front feet neatly and graciously together. Then it gravely swished around its tail to completely encircle itself. It was so fit and beautifully neat, that gesture, and so self-satisfied, so complacent.” Our cats sometimes vary the routine on cold days by tucking their tails under their front feet, so as to spare their tiny toes the horrors of the cold floor’s chill embrace.

The Croquet Hoop
A stretch, frequently the first action of the cat on waking, during which the four paws are placed close together, and the mid-point of the cat is pulled up as high as possible. The cat may then proceed to another stretch, pause for a wash, or decide that waking up was a bad idea and return directly to a sleeping position. Note: due to the close placement of the paws, there is no room for a hedgehog to pass through the hoop, even when guided by a flamingo. Do not try this at home, or, indeed, anywhere.

the Sphur (or Sphere of Fur), known in lesser forms as the Cushion
This is a pure sleeping position, although some cats foolishly attempt to make it a purring position and end up sneezing out their own belly-fur. Ideally, the tail is curled over the head to form a complete circle of spine enclosing the more liquid elements of the cat. Advanced practitioners take care to position themselves so that onlookers can discern no feature in the mass of fluff, although the difficulty of neutralizing the second ear is widely acknowledged.

The Dead Cat or Hearthrug
Despite the name, cats seldom take this position on a hearthrug. It is more frequently seen on warm days when a cat realizes that its solar cells are fully charged and further lingering in the sun may lead to spontaneous combustion. (Cats are strangely attracted to heat, considering the dictum that heat is work, and their total avoidance of the latter.) The cat will then flop down on a cool piece of floor – preferably in a high-traffic area – and pretend to be dead until a suitable level of heat transfer has been achieved.
The full exposure of the belly may lead an inexperienced person to assume that the cat is proffering its belly for a rub, but they will soon learn their error as the cat snaps shut about their arm like a bear-trap. This pose is seldom used for purring, sometimes for sleeping, and invariably for nursing kittens.

the Slingshot
A stretch, during which the front legs are extended and the bulk of the cat is pulled as far back as it will go. The same profile can be obtained by attempting to remove a cat from a surface it does not wish to leave, providing that the surface can be latched onto with claws. It is generally followed up by: 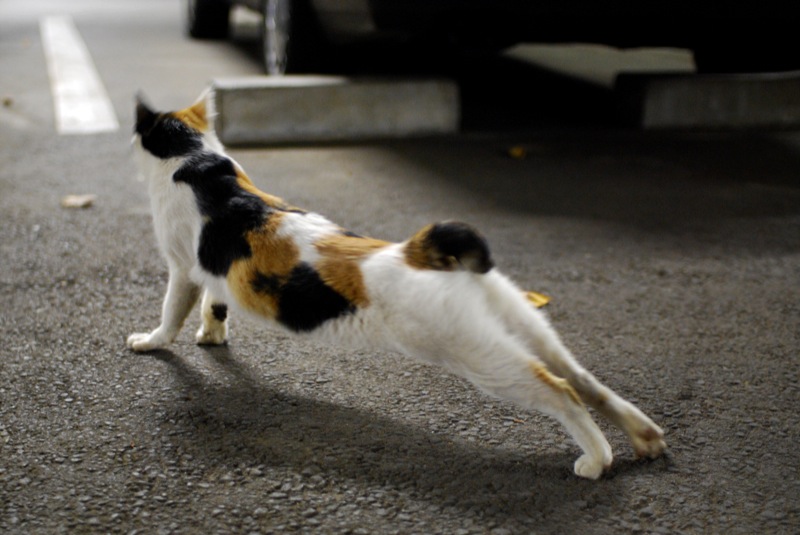 the Reverse Slingshot, or Fire! in which the bulk of the cat moves forward and only the very tips of the back toes remain behind, as though the front half of the cat is walking away and the back half has not yet got the memo. Generally followed by a nonchalant foot waggle, as though the cat were shaking your dust from its feet – which takes some gall, since your dust is probably mostly their discarded hair anyway. The cat then strolls away, in search of food or a more inconvenient location to take a bath. 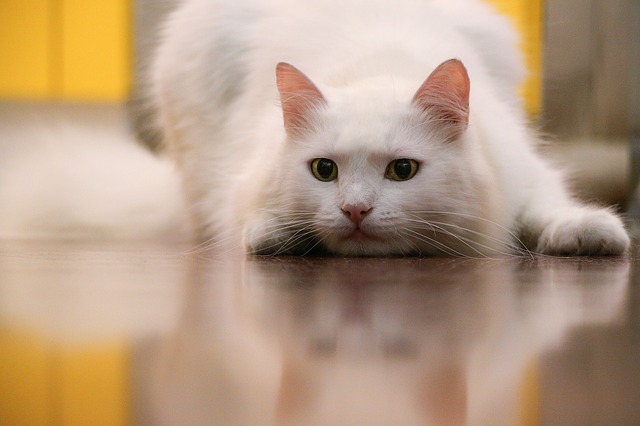 the Rev, performed when preparing to pounce. Similar to a Slingshot stretch, the front is carried low. The posterior is well aloft and is swayed from side to side. This is equivalent to a race-car driver revving his engine at the starting line, and is presumably performed to work up enough static electricity to power the hind-legs in that all-important initial bound. Our ginger cat does remarkably well with his hunting, given that he always gives his prey notice by sticking his fat orange bottom in the air and waving it about like a Belisha beacon trying to hail a taxi.

This list is of course by no means complete, so do feel free to contribute your own observations in the comments!