My pet theory (one of them – I keep a menagerie) is that there are two basic kinds of shopping: tiger shopping and sheep shopping. The tiger knows just what she wants. She knows where such things are likely to be found. She stalks her prey, she selects the juiciest from the herd of possibilities and – she pounces!
Should the tiger’s preferred prey elude her, she will not waste her time running after something else. No. She will retire to her tree and sulk. And when she’s got over her sulk, she’ll go hunting again.
Tigers are also noted for teaching their offspring to hunt the same way.

In marked contrast to this is sheep shopping. The sheep prefers a more laid-back style of shopping – frequently as part of a sociable flock. The sheep mosey from place to place, having a nibble here and a nibble there. They graze as they wander along, stopping now and then to munch down a particularly tasty morsel. The sheep is not looking for anything in particular, she’s just seeing what catches her eye. 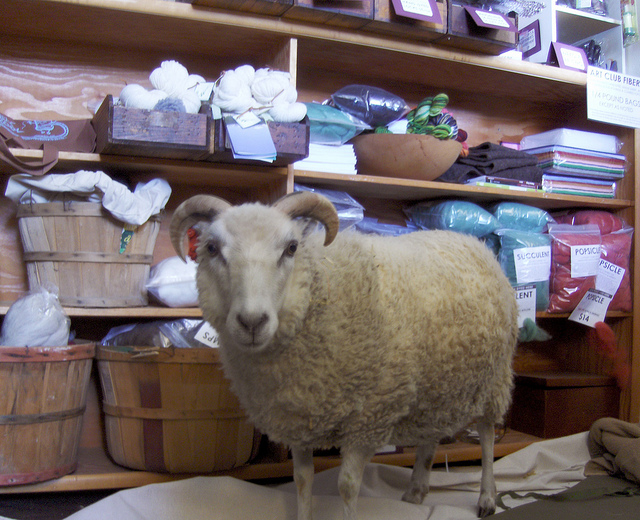 Both approaches have their good points and their bad points. Tiger-shoppers seldom waste money; but they sometimes use up a lot of time looking for just the right thing – especially since they don’t shop as often as sheep shoppers and don’t necessarily know what’s available where at the moment. This also means they’re less likely to own stuff they don’t really like.

Sheep-shoppers spend lots of time shopping as a matter of course, but don’t get stressed about it as they aren’t aiming for efficiency and are probably socializing as they go in any case. They do often waste money, though, because it’s quite hard to spend significant time shopping without buying anything. They are more likely to be dissatisfied with their purchase(s) once the “new thing!” buzz dies away.

If you carry sheep shopping to the extreme, you get goat shopping. Goats will go anywhere and consume anything, with a complete lack of discrimination. Goat shopping results in having too much stuff and not enough money. It is bad for you, the environment and everything in between. Do not act the goat.

And speaking of acting the goat, did you hear about William Windsor trying to headbutt a drummer during a Queen’s Birthday parade? True story!

Which kind of shopper are you? Tiger, sheep, goat, or a mix of all three? I prefer tiger-shopping myself, but I spend a lot of time sulking in my tree. And sometimes I make a baaaad decision (sorry!) and buy something that isn’t quite what I wanted, just because – unlike what I wanted – it was there.