You know how it is. You lurk for a while, then you comment for a while, and then you decide you just can’t resist and you get involved. So it was with me and the Historical Sew Fortnightly. In 2013 I lurked, in 2014 I commented, and now in 2015, I plan to take part. Ths year it’s been revamped as the Historical Sew Monthly, but I still don’t think I’ll manage all twelve challenges. Small but sustainable, that’s my beginner’s ambition.

I didn’t want to make anything that I couldn’t wear in daily life, but being æsthetically eccentric, that’s a wide range. Not as wide as a crinoline, though. I do have some sense of practicality.

So I decided to start with a simple chemise or shift, the foundation of Western clothing for centuries, and something which would fill the gap in my wardrobe marked “light summer nightgown”.

I give you, therefore, my first HSM project: The Igor Thift!
(Apologies for the exoskeletal dress-form – she’s in shape, but I haven’t got around to covering her yet.) 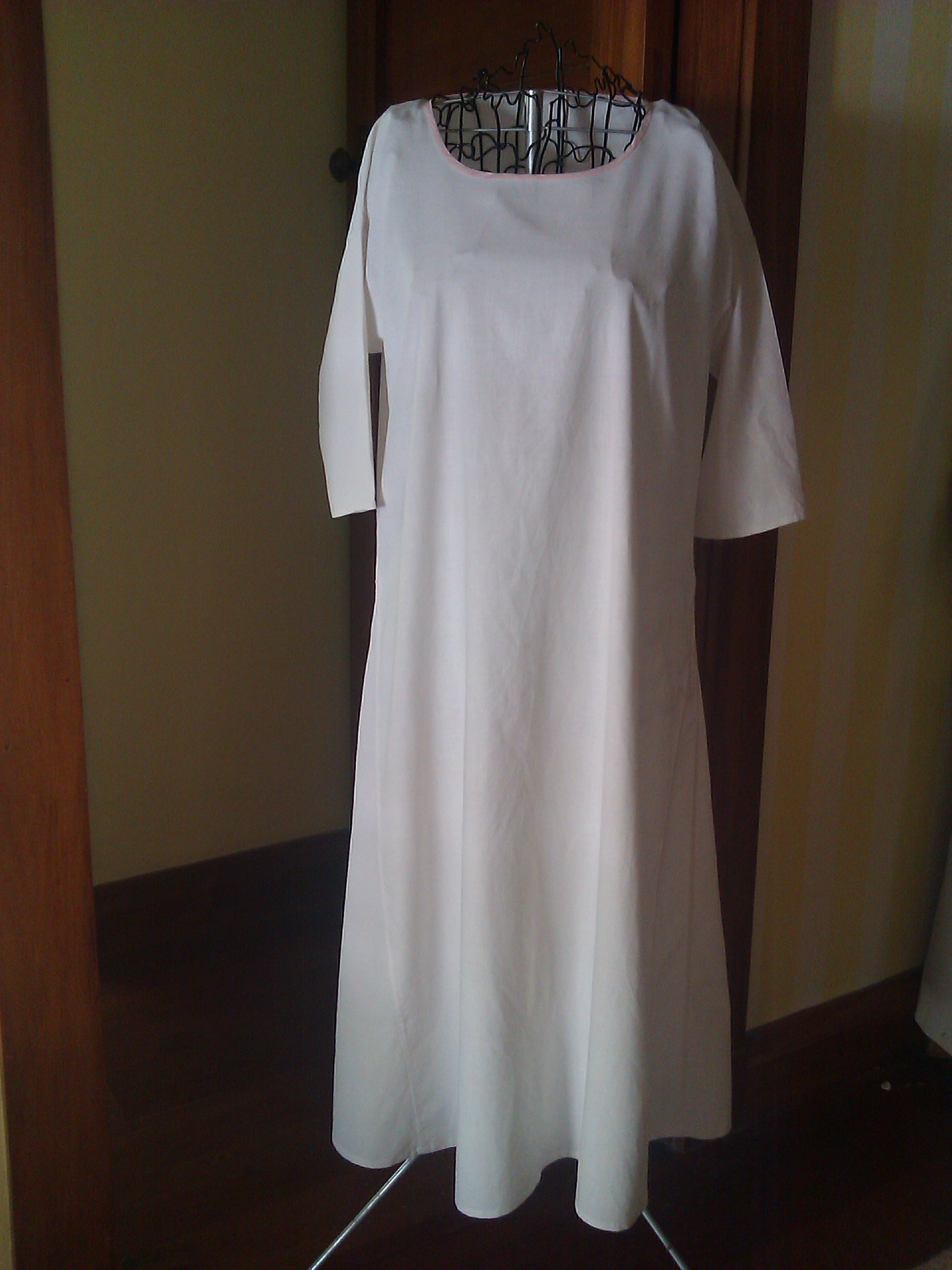 The construction is a bit mixed: I used historically accurate flat-felled seams, but they were sewn partly by hand and partly by ye notte quite olde enoughe hand-crank sewing machine (post WWII Japanese Singer knock-off).

The finished shift includes lock-stitch (machine), back-stitch, running stitch, whip stitch and even, embarrasingly, blanket stitch. This, combined with the fact that the Caped Gooseberry was reading me Terry Pratchett’s The Fifth Elephant as I worked, caused me to dub this the Igor Thift. Alas, my stitches are not quite Igor-worthy in their tininess, although the hand-crank does up to 30 stitches per inch, should anyone be mad enough to want it to. 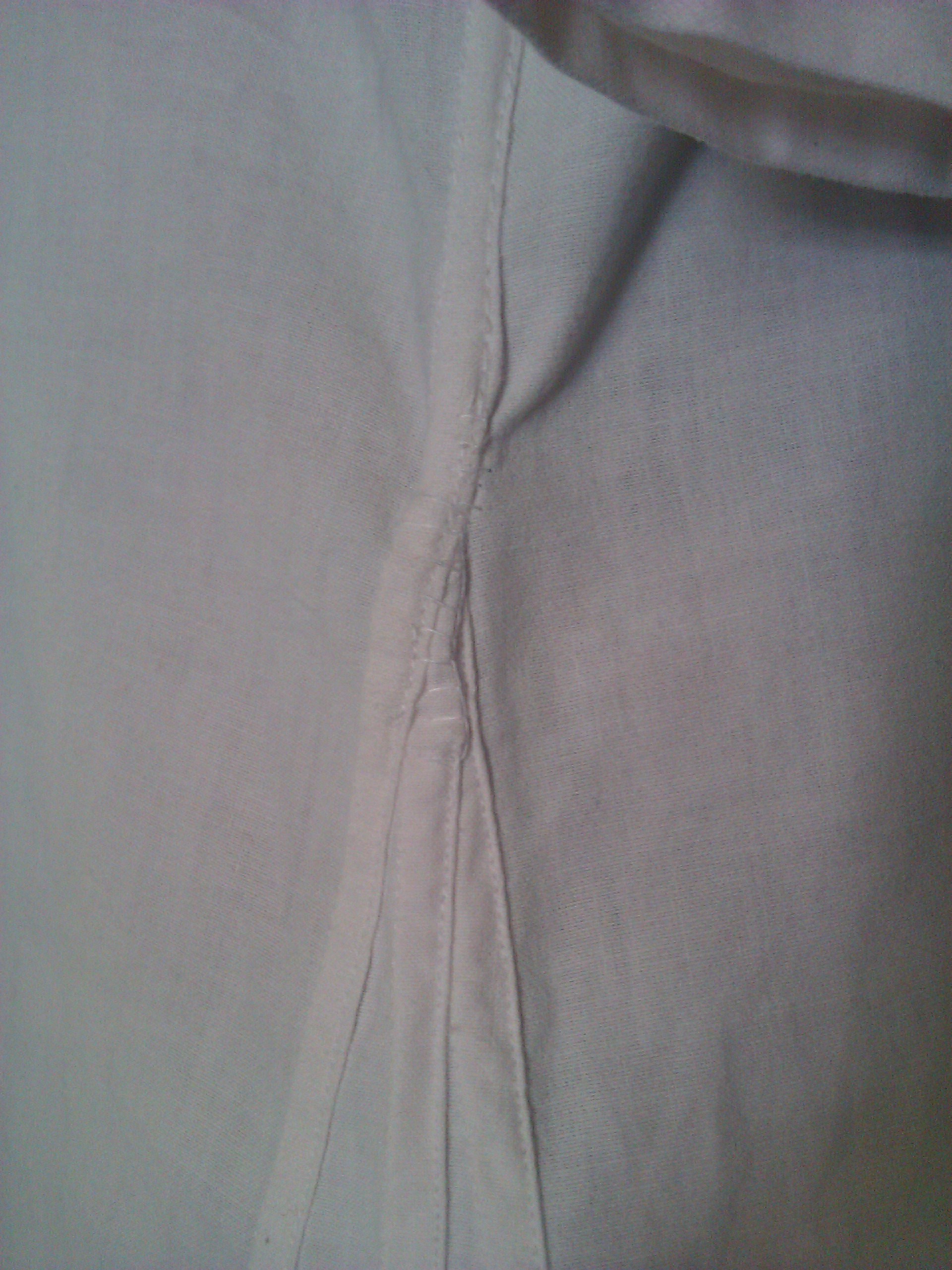 Hours to complete: embarrasingly many. Perhaps as many as 20? The whole process was slowed down by not deciding it was too wide until I had already sewn the side gores on. So I tore part of it off, cut two new side gores and started again on that side. (The pattern suggests adding 20cm ease – I should have done this before halving my maximum circumference, not after.) I did two side gores on each side, attached to the body along the hypotenuse for that isosceles-triangle effect.

First worn: as a nightdress for a trip to the Coromandel in the last week of January. Light and comfortable.

Total cost: time and energy. The sheet was discovered in an archaeological dig of the rag cupboard, and the binding was inherited from my grandmother’s stash. So it could also be considered as an entry for March (Stash-Busting) were it not against the rules to enter one item for multiple challenges. What I Have Learned From This Project:
1) Even with simple things, it pays to plan ahead. Especially where one is going to have three seams merging into one.
2) It’s all right for things to not be perfect.

I had originally planned to do about six items, each of which would work for two consecutive challenges. But that was when I thought Stash-busting was February and Colour Challenge Blue was March, rather than the other way around. I may still try to do six items which between them cover all twelve challenges, as I have an idea for something which will work excellently for both Blue (Feb) and War & Peace (Apr). Opinions? Advice?

9 Replies to “Eccentric Æsthetics: In Which I Attempt the Historical Sew Monthly”