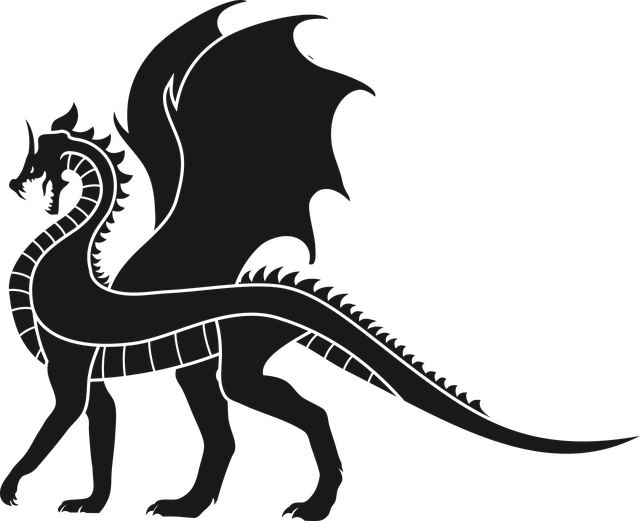 What else do we know about dragons’ physiques? Bilbo Baggins tells Smaug he’s always believed “that dragons were softer underneath,” and indeed “there is a large patch in the hollow of his left breast as bare as a snail out of its shell!” Nor is this softness beneath a feature of Smaug only.

And here, my friends and fellow dracologists, we find the explanation of that long-known and familiar phenomenon, the cat who wants their belly rubbed, but suddenly mid-rub snaps shut about the rubbing hand like a bear trap. The unwitting tummy-rubber has ventured too close to the voonerable spot, and aggressive evasive measures must be taken to prevent discovery of this weakness.

The classic behaviour of the dragon is, of course, the forming and guarding of a hoard. This is generally supposed to be of gold, jewels etc, but other hoards are known (e.g. hoarding books, as in Mercedes Lackey’s One Good Knight; or even fruit, as with this dragon). With cats, the hoarding instinct takes a variety of forms.

Toys under furniture is a popular hoard-form, but cases have been known of tennis-ball hoards, junk-mail hoards, and even cicada-casing hoards – and yes, those are just my cats. Cats don’t always sleep on their hoards, though The Cat is often found sleeping in the box of paper recycling to which her junk-mail contributions are invariably added.

It has recently occurred to me to wonder if the reason why our cats so much dislike sharing a lap with each other (indeed, The Cat will only climb onto a lap which already contains The Kitten if he is concealed beneath a blanket) is that the person to whom the lap belongs is, for the time at least, considered the cat of the first part’s hoard, and the cat of the second part is committing a dreadful solecism by attempting to share it.

The above illustration also depicts another point of similarity – or dare I say, continuity: the habit of sleeping in a curled position. Dragons don’t generally need to curl up as tightly as cats, because the flame-breathing apparatus acts as an internal heat source.

Of course, there are doubtless those who will point out that dragons are more like reptiles in their general appearance (although these are quite possibly people who do not think of T-Rex as feathered). It is true, I admit, that dragons have one or two lizardly aspects. Basking, for example. But is basking any less catly? Run this simple test: have a patch of bright sunlight in your home, and see what arrives to bask in it first: a lizard or a cat.

Basking in sunlight – or indeed by any heat source – is what cats do best, possibly because it reminds them of the far-off days when they could breathe fire. Let us all be thankful that cats no longer have this capability, or it would be even harder to ignore their persistent demands for food hours before dinnertime.

Habitat
The final pieces of evidence linking cats with dragons relate to the creatures’ preferred habitat. Dragons are famed for living in caves, and cats today show the caving instinct. What, after all, is a cardboard box but a temporary cave? Create a cave from anything – bedding, furniture, boxes – and watch as the irresistible urge of its ancestral habit draws the cat in.

There is also the vexed question of how the cat (or dragon) relates to its environment. Stealthing forth in the night to feast upon small helpless creatures which cannot flee in time? Sounds familiar, does it not? (Just you wait till you find a propitiatory mouse chained to a rock at the end of the garden…) Furthermore, both cats and dragons are noted for being what Sid Meier’s Civilization II called “aggressive militaristic expansionists” – whatever it is, they never have enough.

What do you think? Are you convinced? Will you ever look at your cat the same way again?

12 Replies to “Are Cats Really Dragons?”