No, I browsed about with many a random stab (fingers only; no pins), and eventually decided I liked the sound of Romilly. Not any of the Romillies in France, mind you, but the one in Wales – in Barry (Y Barri), to be precise, which is itself named after St. Baruc, who drowned going back for a book. Which, coincidentally, is #2 in Ways Deborah Is Most Likely To Die, after #1: got caught up in a book and forgot to eat.

I would have liked to have some larger areas of time (with energy) free for larger-scale Wombling this past week, but one cannot have everything in this vale of tears. Moving on!

Moving on, in fact, to Bullet Journalling. Or rather, a reduced version, consisting mostly of the Daily Log, which I am keeping in my little Collins A71 diary. (Not really in the true Bullet Journal spirit of acquiring delicious stationery, but after all, this is for one week.)

The general idea of the Daily Log is that you write things down in any order, with classifying marks to the left: a dot for a task, a dash for a note, and a circle for an event (which you can write in before or after it happens).

Once a task is done, you put an x through the dot; or if it needs to be moved on to another time, you make a little arrow like this: >. (Actually there are two sorts of arrows, but for a one week trial I think I’ll stick with one.) If it turns out that the job doesn’t need to be done at all, you just put a line through the whole thing, dot and all.

Furthermore, you are encouraged to add your own extra notations on the extreme left – an asterisk for especially important things, for example. In fact, pretty much every example I’ve seen online has been well and truly customised. 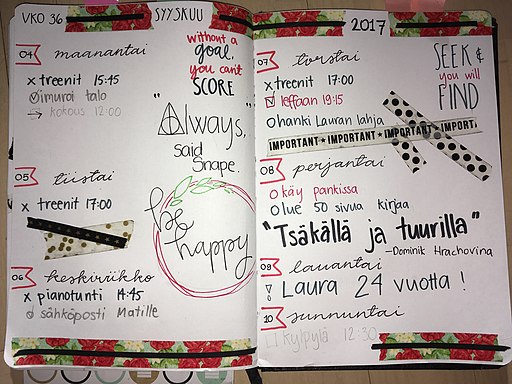 Purists will doubtless say that you can’t experience the true value of the system in a week, and no doubt they are right. The same could be said for most of the methods, I think, but I have no wish to spend most of my thirties doing this experiment. A week, therefore, will have to do.

Have you ever tried Bullet Journalling? What do you think of it?