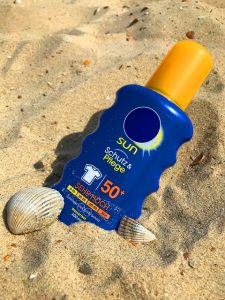 There’s just something about the smell of sunblock which says summer to me. Which I guess goes to show that I don’t wear sunblock nearly as often as I should. In my defence, the new normal in our local climate seems to be three months of searing heat followed by nine mild months of rain.

Winter, on the other hand, begins the first day one wears one’s woolly underthings without getting overheated, regardless of what the calendar may have to say about it.

Strangely, I find I am easily confused about whether we’re currently transitioning from summer to winter or winter to summer. I don’t think it’s due to excessive exposure to Northern Hemisphere points of view; I think it’s due to something deeper.

Subconsciously, I think of the year as having two seasons, each appearing twice. There is the Comfortable season and the Hostile season, Hostile being when you don’t want to go outside because of the weather. Apparently my brain doesn’t bother distinguishing between Too Hot and Too Cold. It’s just Hostile.

Hence my confusion. I’m basically asking my brain to tell me if the recent season was Hostile or Hostile. The answer is that it was Hostile (Cold) and we are presently working our way through Comfortable (one of) towards Hostile (Hot).

Who knows? Perhaps with time I may even be able to train my subconscious to distinguish between autumn and spring.

What marks the true beginning of a season for you?