Three packets of dye, that is.

Some of you may remember the hemming escapade I went on nearly a year ago. Amazingly, it’s taken me this long to realize that the colours of the dress didn’t really suit me. I looked ok, but just ok. I decided… to dye.

After quite some time (a whole evening, if I recall correctly), doing research on what was available where, what people thought of it, and what colour it came out, I ordered a four-pack of Dylon Burlesque Red. Which isn’t red, in case you were wondering. In fact, I’m pretty sure it is also known as Plum, which makes a lot more sense.

After a bit of hassle (ordered 4x50g, got 1x50g, returned the one, reordered the four, followed by a supply issue, followed by some clever person realizing that four ones is the same as one four), I received the dye and set to work.

Each packet dyes up to 250g of fabric (dry weight) to the full colour, or more to a paler shade. I didn’t want a paler shade, so for my 700g of fabric I used three packets. I wasn’t sure about whether the required 250g of salt or the 6L dye bath also needed to be tripled, and I couldn’t find any definite advice online, so I didn’t triple the salt, and I only tripled the 500mL for dissolving each packet of dye.

I quite like the colour it came out – a sort of ripe plum. Or at least, what I would call ripe, which is what everyone else would likely call not quite ripe yet. It’s not too bluey, and not too pink; and I really hope it doesn’t fade. As you can probably see, the triangles are still darker (“colour mixing rules apply,” as the packet notes).

The kerchief/Super-Bandanna came out a slightly different shade, being made of tea-dyed calico; but the triangle on the kerchief is the same fabric as the triangle on the dress, and thus came out the same colour as that. (Confused?) The lack of complete match doesn’t really bother me as I don’t often wear the Super-Bandanna: it’s too big for convenience, and doesn’t produce the line I was hoping for. Maybe one day I will alter it, but so far I haven’t got round to it.

The one downside in all this is the fact that the thread and zip didn’t take the dye. The thread is likely polyester (unlike the dress, which is linen/rayon blend) and the zip is metal. So the seams clearly stand out, outlining the neck, triangles etc. 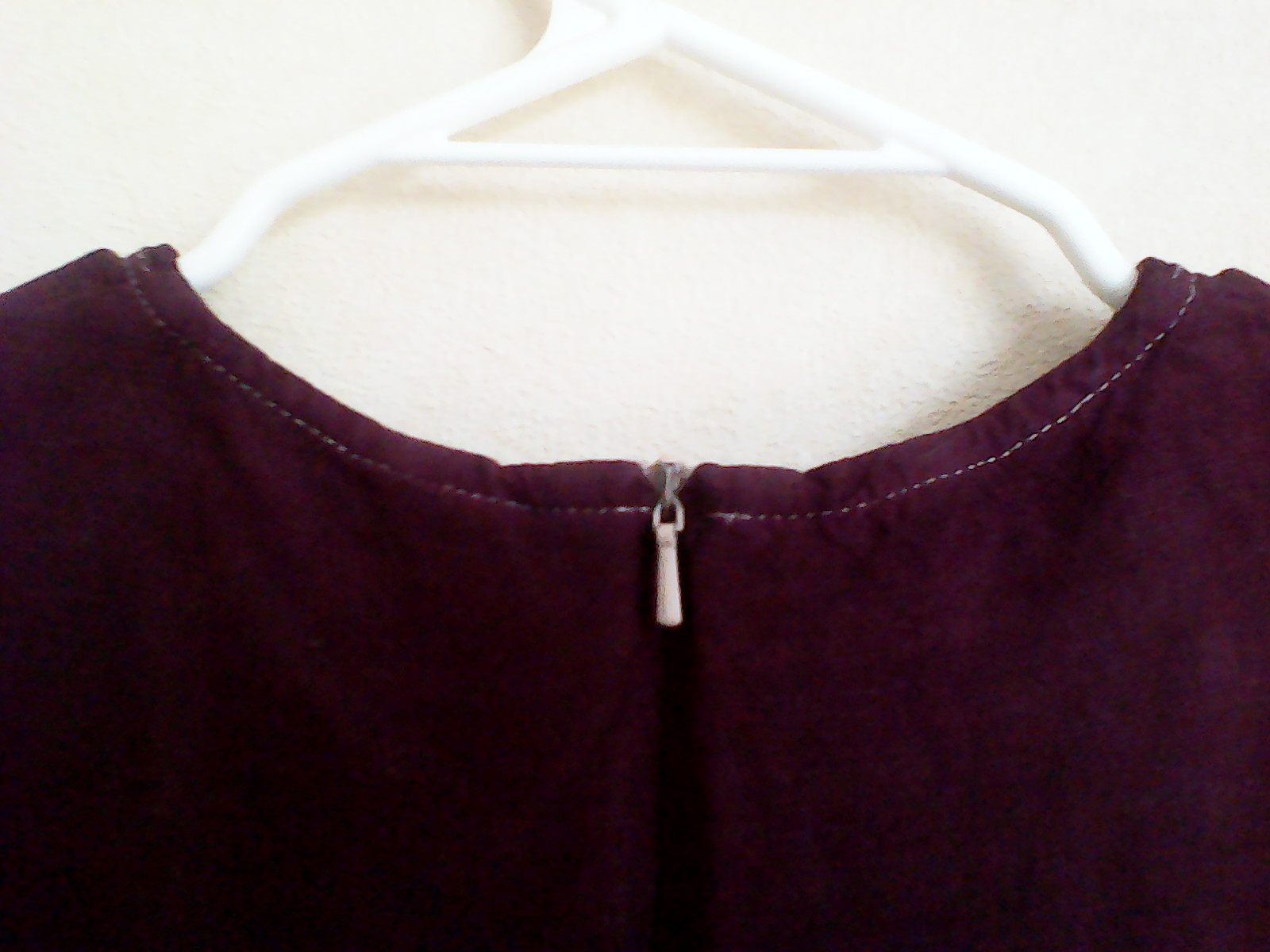 But overall, I’m happy with it. Plenty of dye came out during the rinsing process, and I’m just hoping that what’s left stays fast, because I like the deep tones and I don’t want to lose them!