There is a category on this blog marked Current Obsession. It is there for a reason. Generally my current obsession is either worked off in library books, or in handwork – the DPN/hook case, for example, or the Dishonour Cow. (Sometimes it is worked off in books about handwork.)

On the other hand, I can be very persuasive when in the grip of an obsession.
In the recent heatwave, when it was too hot to knit, I was fretchetting about, needing something to do with my hands.

The idea came to me that a sort of snoody hairnet would be just the thing: made of cotton (no woolly warmth on hands in working) and keeping hot itchy hair off neck. Find pattern, seize only thinnish crochet cotton, seize only small-bore hook (1.75mm), commence!

The wily and experienced among you will notice that there was no mention of gauge in this process; nor was there any mention of ensuring correlation between a) pattern, b) yarn, and c) hook. People frequently size the pattern up or down by adding extra rows; it would be fine with whatever came to hand, surely? I didn’t want a big slouchy thing hanging on my neck, so I could chop out a few rows.

I carefully collated notes on which rows people omitted, and having reached the Point of Decision found that the thing was far too small. I ended up doing the whole pattern – ring after ring of interlocking chain stitches – and then made a casing and threaded it with fine elastic.

It was too small.

Not the casing; no, the casing was fine. It was the whole thing that was too small. It was basically a skull cap, a creamy lace skull cap. I left it for a couple of weeks, and then decided to frog it, as knitters say (rip-it! rip-it!) and return it to something approaching its original form.

But… I’d sewn in the ends. I don’t enjoy sewing in ends, so I generally try to make sure that I will never have to sew this end in again. I couldn’t even find the end, so short of taking the scissors to the thing, frogging will not be an option.

May I therefore present to you: the Doily of Gauge Regret. 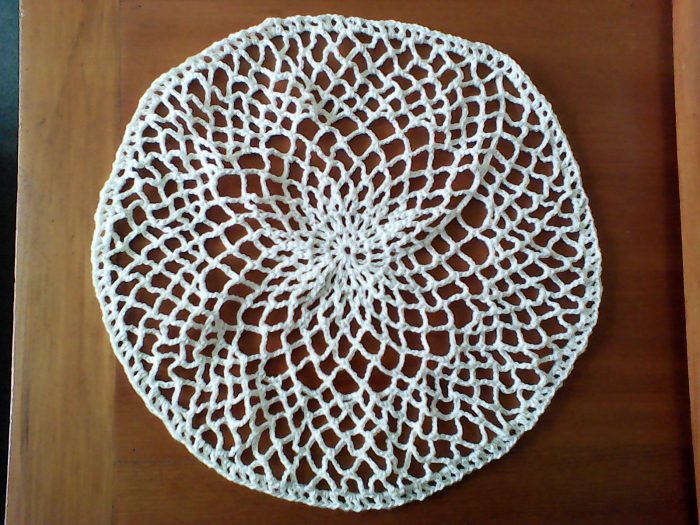 It could use some washing, some blocking, some pressing, aaaand a whole new life in someone else’s house.

Incidentally, for those of you who were wondering, the reason circular scarves are sometimes called snoods – even though they bear them no resemblance –  is because food-workers’ hairnets used to be called snoods, and the circular scarfy thing used to keep beard hair out of food came to be called a beard snood.

That is not to say that only a hairnetty thing can rightfully be called a snood. No, no. A snood can also be a piece of fishing gear or a fleshy protuberance, excrescence, or caruncule hanging off the face of a turkey (and it’s probably only a matter of time before a pattern for that shows up on Ravelry).

Next obsession: trying to figure out right yarn/needle/pattern combination for well-fitting socks.