Seventeen measurements, to be precise (dictated by Pattern Drafting for Dressmaking). The full panoply of which (good word, panoply) gives you enough information to create a pattern which fits you perfectly. The measurements include everything from your widest point or ‘seat’, to the distance from your neck to your waist at front and back, to the circumference of said neck at the base. 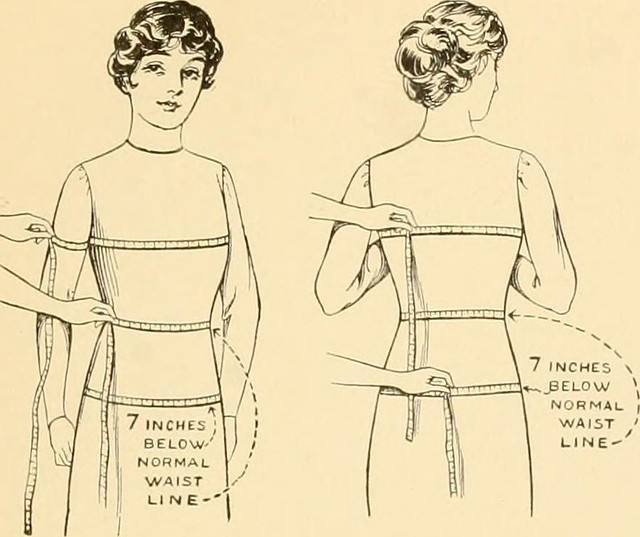 Obviously, these are very difficult measurements to take by yourself, particularly if you want any degree of accuracy (which you do). Unlike the woman in the pictures above, who has either the help of two people, or the help of one freak with two left hands, I had the help of the Caped Gooseberry (CG: where is the base of your neck? me: where those two little knobbles are).

So all I had to do was stand there and help figure out what the descriptions meant. (I think we still got at least one of them wrong.) Seems simple enough, you would think. But now for the hitch in Deborah’s character, to steal (and alter) a line from Jane Eyre.

Until my dearly beloved pointed it out in so many words last night, I had only dimly realized this, but I am not good at estimating how big a task something is. At All.

This works both ways. On the one hand, I might cavil and procrastinate, feeling that a job is looming over me like the vulture of doom. And then it turns out to only take ten minutes. On the other hand, I may cheerfully sign myself up for something which is going to take far more time and effort than I realize… and then I end up feeling overwhelmed and stressed by the obligation.

Anyone remember the epic quilt of craziness? The rose quilt gargoyle? It turns out that the hussif of perpetual remembrance is not enough to keep me on the straight and narrow. Nor was my cunning plan sufficiently cunning, after all. It would appear that I am a slow learner in this respect.

This post was originally going to be titled “Upskilly & Stuff 7: The Diagram” as I intended to not only obtain the necessary measurements, but create a full-size foundation paper pattern from them as well. This did not happen.

It turns out that going from ‘hem a square’ to ‘sew two full dresses and a fitted cover for a dressmaker’s dummy’ in one year is rather overambitious – particularly if you are also wanting to write a novel, declutter your house, do other handwork, write a regular blog and keep up with all the other general life things that life entails – all in the same year.

This doesn’t mean that I’m giving up entirely. I’m just going to be proceeding at a more healthful pace. But how does a unrealistic estimator such as myself know what a healthful pace is? I am indebted to my husband for this solution. He said: habit.

Instead of picking a task and a deadline and making yourself stressed over getting the two to meet, you develop a habit. Instead of “I must whittle an entire chess set for Uncle Claude by his birthday” you say “I whittle away at the chess set on Tuesday and Thursday evenings.” And then, having said it, you do it. (Caped Gooseberry: I have habits because it’s easier than deciding what to do all the time.)

Thus, the chess set gradually comes into being, without a deadline hanging over your head, and without the attendant stress. And if you miss a night or two, it’s not the end of the world, as long as that doesn’t become a habit. Maybe Uncle Claude doesn’t get his chess set this birthday, but he gets it, and you don’t get an ulcer.

So that’s going to be my approach: make a habit of working at the current task (make diagram/pattern, make fitted cover, cover exoskeleton) until I’ve seen it through to the finish, and then start the next one. I’ll keep popping up with posts about how it’s coming along, and hopefully they will be more interesting for being written with a lighter heart and a lack of time pressure. I may even diverge into the intriguing byways of what other kinds of handwork I’ve been doing – ZipfelmuetzenBommelschal, anyone?