In the first half of the twentieth century, you’d be likely to see a woman debating whether to wear, say “my blue” or “my black”. Each garment familiar to the last detail. These same women’s grandchildren are angsting over which of their 17 black tops is the right one for this evening – this one’s coming adrift at the seams, that one’s gone grey in the wash, that one I really like is in the laundry basket…

Being decidedly old-fashioned in this matter, I find myself out of tune with much of the world around me, despite behaving in a way that existed within living memory – and all the time before that, right back to Time Immemorial.

The core of my wardrobe is five dresses. They range in age from two to five years old, and with one exception, have been worn in almost constant rotation during that time. And that being the case, they’ve needed occasional mends and I’ve also, over the years, made some alterations.

Unsurprisingly, the one I wear least has needed the least work. It’s not that I don’t like it, it’s just that being a thick cabled knit dress, it doesn’t get worn in warm weather – it’s just too hot. I’ve had it since March 2016, and the only attention it’s needed in that time is re-securing the edges of the pockets.

The oldest dress – acquired in May 2014 – is the second-least amended, possibly because it’s made of quite sturdy material – sturdy enough that I don’t wear it in high summer. I took the hem up when I got it (the standard figure Shukr designs for is taller for the width than I), and some years later mended a strained armhole seam.

The newest dress (just over two years old) has also not had a great deal done to it. I made a matching kerchief out of conveniently matching cloth as part of last year’s Upskilly & Stuff, I used the same material for a unobtrusive reinforcement at the base of the zip, and I mended a hole in the pocket with the sewing machine while wearing the dress. I don’t think I would have dared if the machine wasn’t a manual. 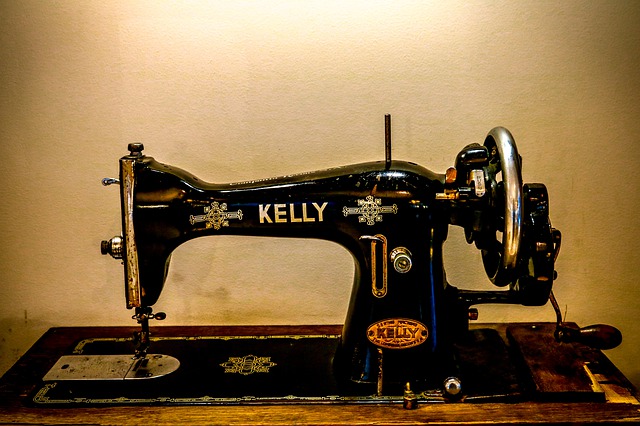 My favourite dress is the second-to-oldest (acquired August 2015), and not being of such thick material as the oldest, it has needed a bit more work. I’ve replaced the buttons, I’ve coloured in the bit where I got bleach on it (brown sharpies: they do exist), I’ve re-secured the waist seam where it was coming loose, and I’ve patched and darned holes where the armholes meet the side-seams.

I recently noticed that one of the patches needed mending, and having done that, I gave the dress a looking over… only to discover that one entire sleeve is coming adrift at the shoulder. I have mended it again – it is my favourite, after all – yet I fear it may not be with us for much longer. (When it is finally past mending I will snip off the buttons for re-use and compost the rest.)

But the award for Most Emended Dress goes to the one I wore to write this (which I’ve had a little over three years). I took up the hem – and what a saga that was – I made a matching kerchief in part from the trimmings, I put tiny weights in the hem and mended it when they came out, I mended a hole in the pocket and I dyed both the dress and its kerchief another colour.

Hems taken up, holes mended, buttons replaced, colour changed, accessories made to match… these dresses have lived. Happily, most of them still have a good bit of life left in them. And that, my friends, is the way wardrobes were, since time immemorial, and the way they can be again.

What’s the winner of Most Emended Item in your wardrobe?

4 Replies to “Wardrobes the Way they Were”